Group of Eminent Persons for Substantive Advancement of Nuclear Disarmament

1. Overview and Backdrop of this Initiative

In the backdrop of the deterioration of international security environment and emerging of serious schism on approaches towards a world without nuclear weapons between nuclear-weapon states (NWS) and non-nuclear-weapon states (N-NWS), and even among N-NWS. Based on these circumstances, Former FM Kishida announced the establishment of Group of Eminent Persons for Substantive Advancement of Nuclear Disarmament (SAG) in his statement at the First Session of the Preparatory Committee of the 2020 NPT Review Conference in May, 2017.

This initiative aims for making a recommendation, which contributes to achieve substantive advancement of nuclear disarmament through inviting its experts from both of NWS and N-NWS to Japan by end of 2017 in order to rebuild trust among countries having differing approaches towards a world free of nuclear weapons.

SAG is consisted of a total of 17 experts; 7 Japanese experts including the chairperson, and 10 foreign experts from NWS and N-NWS including the States promoting Treaty on the Prohibition of Nuclear Weapons. The members are experts in nuclear disarmament & non-proliferation and the international security, and two experts from Hiroshima and Nagasaki are also included. 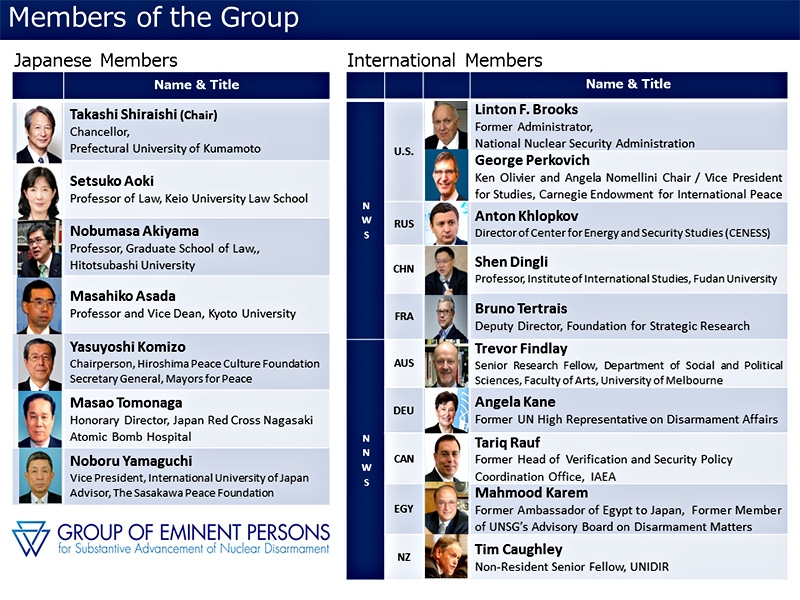