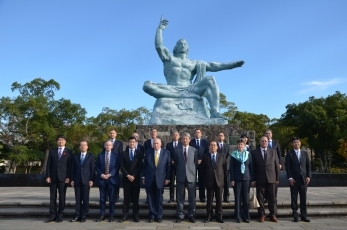 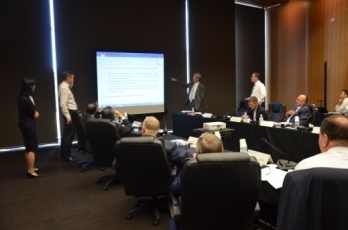 1. On November 14th and 15th, the third meeting of the Group of Eminent Persons for Substantive Advancement of Nuclear Disarmament (EPG) was held in Nagasaki Prefectural Art Museum, Nagasaki City. The meeting was attended by a total of 15 EPG members, consisted of 7 Japanese members, including the Chair, Professor Takashi SHIRAISHI (Chancellor, Prefectural University of Kumamoto), and 8 international members from nuclear-weapon states (NWS) and non-nuclear-weapon states (N-NWS).

2. During the meeting, based upon the recommendations which were input to the Second Session of the Preparatory Committee of the 2020 NPT Review Conference by Foreign Minister Kono in April of this year, the EPG members actively discussed issues including “hard questions” regarding the relations between nuclear disarmament and security that have to be resolved on the way towards the elimination of nuclear weapons, from mid- and long-term perspectives.

3. On November 14th, Mr. Kiyoto TSUJI, Parliamentary Vice-Minister for Foreign Affairs, attended to the opening session on behalf of Foreign Minister Kono. In his opening remarks, he expressed his sincere hope that EPG members will have candid discussions regarding challenges and solutions in advancing the efforts to reduce nuclear weapons, and that through this meeting we will see meaningful ideas and proposals that could serve as a useful guide for bridge-building the divergence in position among states.

4. Also, in the morning of November 14th, EPG members visited Nagasaki Peace Park, and paid floral tribute to the Cenotaph for victims of the atomic bombing and laid a wreath. Following this program, the members made a site-visit to the Nagasaki Atomic Bomb Museum and listened to the story of hibakusha in Nagasaki.

5. In the morning of November 15th, EPG members visited Shiroyama Elementary School where the school building heavily damaged by the atomic bombing is preserved as an atomic bomb remains. The members gathered with school students and listened to their activity reports on inheritation of “the reality of the atomic bombing” to the next generations. After that, EPG memebrs atteneded to dialogue session with the civil society and actively exchanged their views on nuclear disarmament.

6. After the closing session of the third meeting, Professor Shiraishi (Chair of the EPG) and other EPG members attended the press conference. Professor Shiraishi mentioned that they examined the factors for legitimizing or delegitimizing nuclear weapons. He also mentioned the EPG members discussed concrete measures needs to be committed by international society for realizing the advancement of the nuclear disarmament under the current circumstances, and. “Hard questions” which should be resolved on the way to decrease and eliminate nuclear weapons were discussed from mid- and long-term perspectives. Lastly, Professor Shiraishi expressed his intention to summarize their intensive discussions in this meeting before the Third Session of the Preparatory Committee of the 2020 NPT Review Conference.