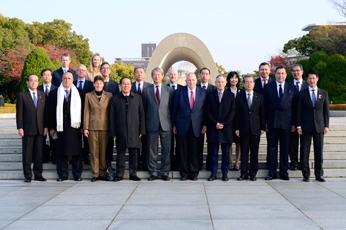 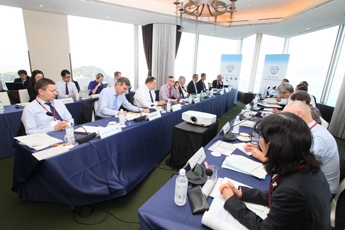 Discussion at the 1st Meeting of SAG in Hiroshima 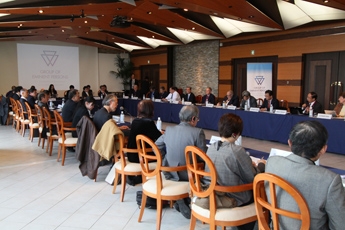 On November 27 and 28, 2017, the 1st meeting of Group of Eminent Persons for Substantive Advancement of Nuclear Disarmament (SAG) was held at Grand Prince Hotel Hiroshima in Hiroshima City. 15 members of SAG from Japan and overseas, including Chairman Takashi Shiraishi (President, Institute of the Asian Economic Studies, Japan External Trade Organization (JETRO)), attended this meeting. The overview on the schedule and discussions is as follow;

1. List of attendees to the 1st meeting from SAG Members

2. Overview on the schedule of the 1st meeting

On the night of November 26, Mr. Mitsunari Okamoto, Parliamentary Vice-Minister for Foreign Affairs, hosted a welcome dinner for SAG members and he made remarks on behalf of Minister for Foreign Affairs Kono. In hisremarks, Mr. Kono stated that Japan believes that making steady steps towards nuclear elimination while taking into account of international security environment is the best way to realize “a World free of Nuclear Weapons”. Also, he expressed his strong hope that SAG members successfully make a recommendation which could contribute to rebuild the corporation and trust among the international community.

On November 27 and 28, the 1st meeting of SAG was held. At the meeting, the members engaged in a lively discussion, seeking for a “common ground” which the international community with various approaches could work together towards “a World free of Nuclear Weapons.” Also, Mr. Kishida, Chairman, Policy Research Council of LDP (former Foreign Minister) attended the opening session and made remarks.

3. Overview on the discussions of each session of the meeting

Mr. Kishida, Chairman, Policy Research Council of LDP attended the opening session and he mentioned following points in his remarks;

Regarding the TPNW, various view from both sides, the position promoting the treaty and the position emphasizing the importance of security environment, were exposed in the session. They also discussed measures to advance arms control negotiations between the US and Russia, the current state of the NPT review process, the roles of the nuclear weapons and others.

Based on discussion in Session 1, members discussed measures to identify the path way toward the elimination of nuclear weapons. In order to make countries having different approaches to come closer to each other, they pointed out the necessity of discussions on issues that each position hasn’t been able to explain so far, and they raised the necessity of finding ways to converge differences. Also, they discussed specific contents such as"the minimization point", verification measures required in the process of elimination of the nuclear weapons, as well as enforcement measures and security measures to maintain “a World free of Nuclear Weapons.”.

(4) NGO Session: Dialogue with the civil society (Morning of November 28)

The dialog session with NGOs and others including local high school student and representatives of A-bomb survivor groups was held prior to the discussion of the second day. Attendees from the NGO side expressed their opinion relating to the realities of the atomic bombings and the importance of TPNW. SAG members appreciated activities of civil society towards the realization of “a World Free of Nuclear Weapons”, and also a variety of opinions were presented by SAG members, such as the necessity of considering the real international security environment in reaching “a World free of Nuclear Weapons.”.

(5) Session 3: “Immediate measures to be taken for advancing nuclear disarmament” (Morning of November 28)

SAG members discussed contents of recommendations forthe Second Session of the Preparatory Committee of the 2020 NPT Review Conference in 2018, and they discussed measures to revitalize the NPT review process, concrete measures such as The Comprehensive Nuclear-Test-Ban Treaty (CTBT), a Fissile Material Cut-off Treaty (FMCT) and reduction of nuclear threats.

(6) Session 4: “Identifying mid-term and long-term measures to arrive at the minimization point and then to a world free of nuclear weapons” (Afternoon of November 28)

SAG members discussed wide-range of issues regarding contents of mid-long termrecommendations such as issues relating to concept of the “minimization point”, as well as the role of nuclear weapons based on humanitarian and normative perspective and the purpose of deterrence.

As a wrap-up of the meeting, SAG members discussed and reached to consensus on procedures to make recommendations towards the second meeting.