Unveiling Ceremony for the G20 Osaka Summit 100-Day Countdown Board

With just 100 days to go until the G20 Osaka Summit (June 28 and 29), officials hosted an unveiling ceremony at Osaka City Hall on Wednesday, March 20 for the event’s countdown board.

Speakers at the unveiling included Seigo Tanaka, the Vice-Mayor of Osaka, Takeshi Akahori, Secretary-General of the Secretariat for the G20 Summit (Ambassador, Ministry of Foreign Affairs of Japan), Shinji Yoshida, Secretary General, Kansai Promotion Council for the 2019 G20 Osaka Summit Secretariat, and Hiroshi Mizohata, President of the Osaka Convention and Tourism Bureau.

G20 Summit momentum was raised with appearances by You Yokoyama and Shingo Murakami two members of Kanjani Eight, the popular Kansai entertainment group appointed as Osaka Tourism Ambassadors in April 2018 to promote the region’s appeal domestically and overseas. 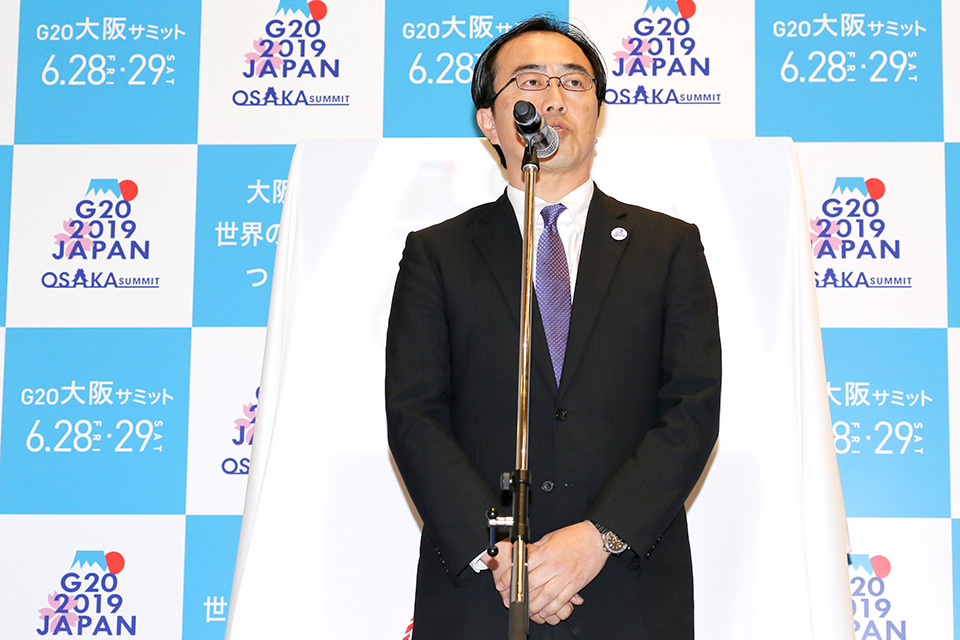 Vice-Mayor of Osaka, Tanaka commented that, “Only 100 days remain until we host the G20 Osaka Summit. Some 30,000 domestic and international visitors are expected, and Summit success depends on the cooperation of Osaka residents. We are counting on you.”

Secretary-General Akahori added that, “The G20 Osaka Summit is the perfect opportunity for us to promote the power and charm of Osaka, Kansai and Japan, ranging from traditions to the most advanced.”

Mr. Yoshida reaffirmed Osaka’s role as host city, commenting that, “A wonderful cast of individuals from every country will be here from June 27 through June 30. Let us spend the remaining 100 days working together to ensure a safe and secure Summit”. Mr. Mizohata similarly underscored the opportunity’s significance for Osaka. “This is the ultimate stage for Osaka to show its presence to the world as the hub city in Kansai.”

Related Events 02 light up on the countdown board 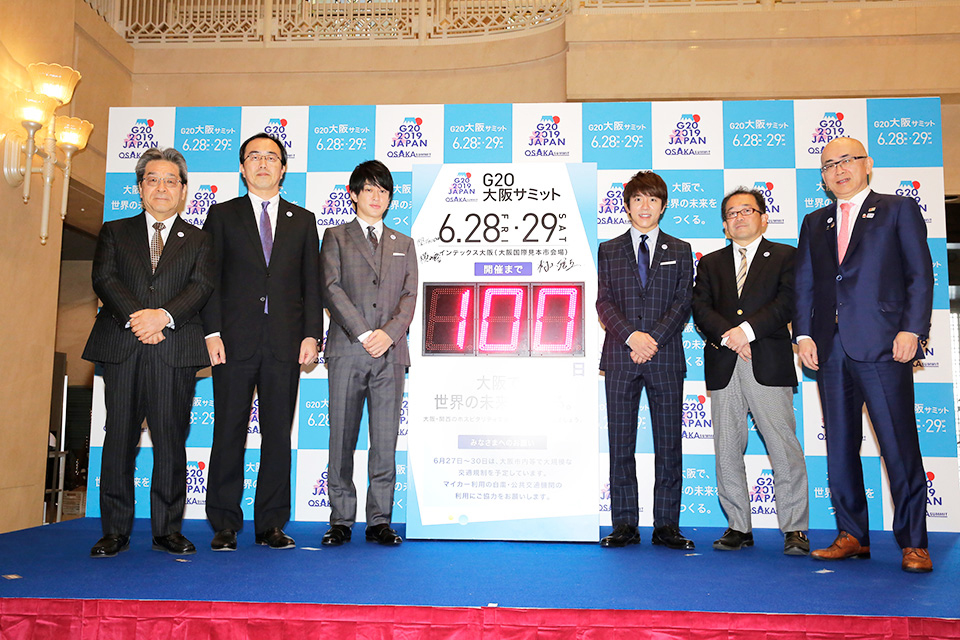 You Yokoyama and Shingo Murakami appeared on stage amidst the friendly atmosphere as the countdown board was unveiled to display the remaining days until the G20 Osaka Summit. The ceremony was followed by a photo session which heightened the thrill of anticipation. 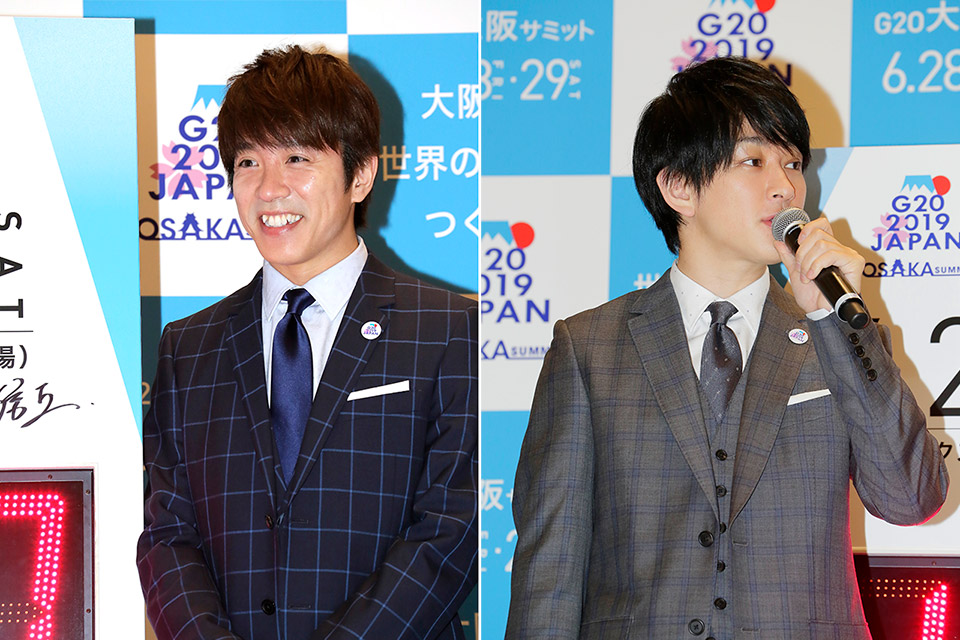 You Yokoyama quipped with a smile that he assumed he would be “participating in G20 discussions,” generating shared laughter. He went on to add a further plug for his hometown. “This is a major event for Osaka, right?! I think we should seize this opportunity for Osaka to become an even more enjoyable place for young people.” Shingo Murakami, meanwhile, declared that, “This is one of those amazing opportunities that comes along once in a lifetime. Kanjani Eight has songs about Osaka that we would like to perform if we have the opportunity.

Secretary-General Akahori responded to the warm message with friendly humor. “Thanks to the great support from both of you, I’m pretty sure that the date of the Summit and the fact that we have 100 days to go will be widely known throughout Japan

“Let’s tell the world that Osaka has many charms too as an attractive Japanese city along with Tokyo.” added Mr. Yoshida. Adding his own keen support for the G20, Mr. Mizohata agreed, saying, “I believe Osaka’s appeal is the capacity of her citizens to embrace all people and live life with vitality. I hope we can offer the finest possible hospitality through friendly communication.”

Osaka Vice-Mayor Tanaka responded, reasserting that, “Osaka will be in the global spotlight as we host many events surrounding the G20. The economic impact is expected to be enormous, which is why we must all help ensure that the Summit is a success.” 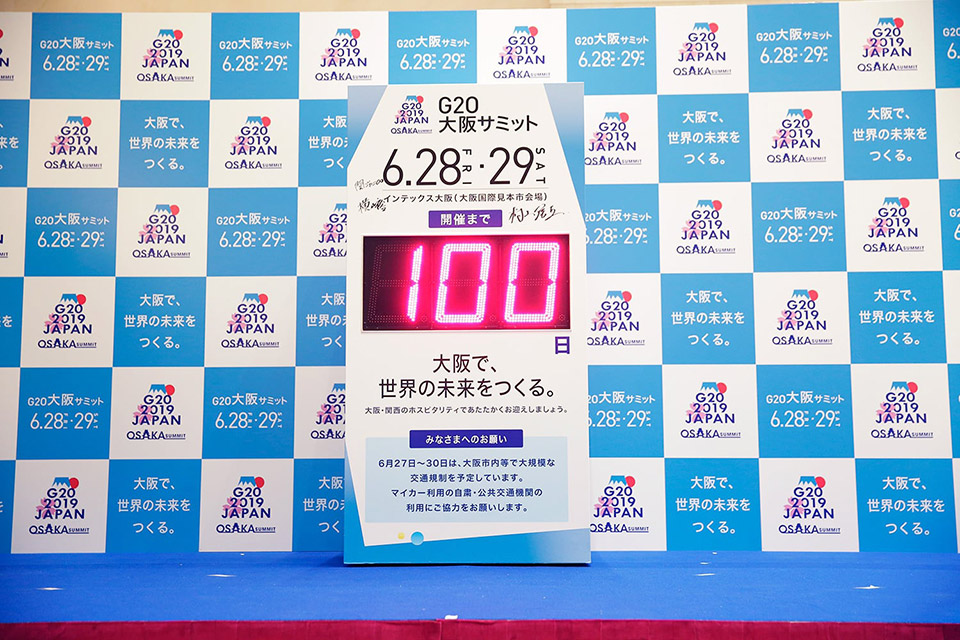 The countdown board will be stationed in the ground-floor entrance hall to Osaka City Hall from March 20 (Wednesday), the red-letter date marking 100 days until the G20 Osaka Summit, through June 29 (Saturday).