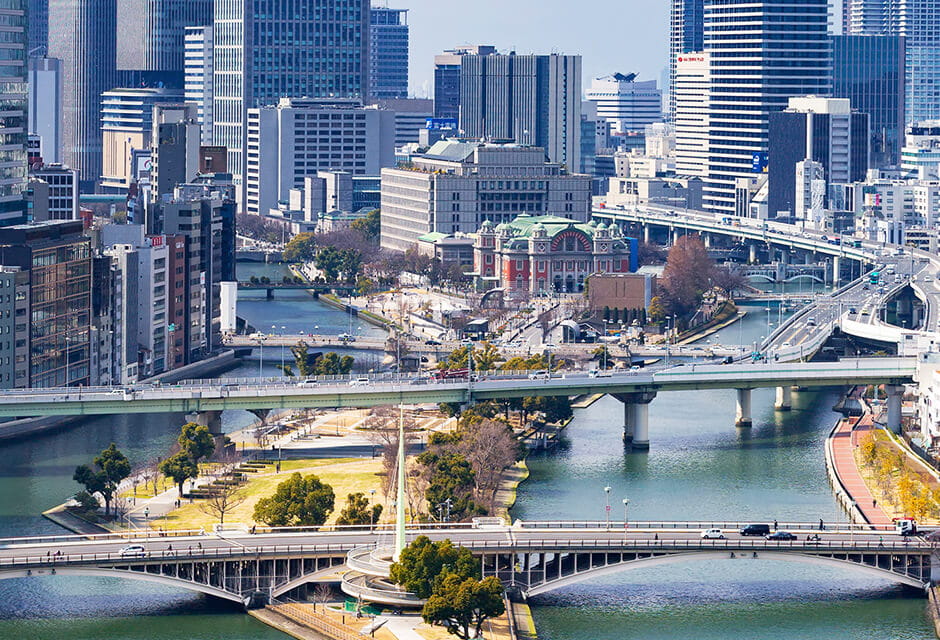 Osaka attracted over 11 million international visitors in 2017. Osaka has drawn international attention as the economic, cultural and transportation hub of western Japan and the central city of the nation’s second largest economic region “Kinki”. The origin of current Osaka dates back to ancient times. The prosperous Naniwa Harbor (the former name of Osaka Harbor) served as a gateway to continental Asia for trade and diplomacy. The nation’s capital named “Naniwanomiya” (7th century) was the political center established in current Osaka and attracted many people. Osaka has continued to grow and prosper as a key urban center even as the nation’s political center shifted to Kyoto, Kamakura and then Edo (Tokyo). Savvy use of the region’s bountiful waterways and ports made Osaka indispensable to the logistics supporting the nation’s economy. Recognizing Osaka’s geographical advantage from early on, Hideyoshi Toyotomi (a samurai ruler known as one of the “great unifiers” during the Warring States period (c. end of 15century-end of 16century)) built Osaka Castle in 1583, and developed Osaka as a metropolis.

During the Edo period (1603-1868), Osaka bloomed as the logistical and commercial center of Japan and began to be referred to as “Nation’s Kitchen”. The Nakanoshima area, which became the heart of the city, still offers lovely riverside scenery, while the Senba area boasts nostalgic modern architecture dating from the early 1900s. Today, Osaka continues to thrive as a merchant city, and the Kinki region including Osaka has underpinned Japan’s economic growth, accounting for approximately 15% of its GDP.

At the same time, Osaka has preserved its traditions and vital history. A group of “Kofun” - tumuli - created around the 5th century still remains in the south part of Osaka. The Japanese Government is seeking the designation of the ancient tumuli cluster “Mozu-Furuichi Kofungun”, including “Nintoku-tenno-ryo Kofun (Emperor Nintoku’s tomb)” - Japan’s largest keyhole-shaped tomb mound, as UNESCO World Heritage Site.

While Edo (Tokyo) was the political center, the Osaka-Kyoto area, collectively known as “Kamigata,” was Japan’s economic and cultural heartland, with unique traditions and culture which still enjoy a high reputation domestically and internationally. In particular, cuisine of Osaka gains remarkable attention from the world and Osaka’s fame as “the city where you eat ‘til you drop!” is expanding abroad. The wheat batter-based takoyaki octopus balls and the savory pancake-like okonomiyaki are soul food of Osaka and popular among foreigners. Osaka’s other culinary stars, such as, kushi-katsu (deep-fried skewered meat/vegetables), udon noodles, and grilled squid, can be found on every corner.

Osaka’s metropolitan center is divided into two areas - the northern (“Kita”) and the southern (“Minami”) area. The area, called “Umekita”, on the north side of Osaka station, is increasing its charm through redevelopment. Meanwhile, Osaka’s south side features Dotonbori, a major entertainment area with popular bars and restaurants crowded both day and night. In the neighborhood of Dotonbori, there are plenty of shopping and gourmet areas, including Americamura (America village), a popular district among young generation, as well as long established department stores. The city has unique districts such as Shinsekai area, with the landmark Tsutenkaku tower and rows of kushi-katsu eateries, not to mention yaki-niku (grilled meat) restaurants in the Tsuruhashi area. There are a multitude of shopping arcades where various shops, for example boutiques, restaurants, souvenir shops and cosmetic stores, are coexisting. Each shop is colored by its unique characteristics while welcoming visitors in Osaka’s friendly style of communication and culture.

Entertainment has also played a key role in Osaka’s development in addition to delicious cuisine. When the Japanese think of Osaka, they think of laughter. In Osaka, culture of laughter has taken deep root in the daily life of local people and theaters are always filled with energy.

Since the 17th century, when Osaka ensured its prosperity as the “Nation’s kitchen”, Osaka has been known for its enterprising spirit, and willingness to take on new challenges. Many famous manufacturers had emerged from the metropolis before, and in more recent years, enterprises with formidable technological strengths in biotechnology, life sciences, and robotics have clustered in Osaka. The energetic “Well, get to it then” spirit continues to thrive today.