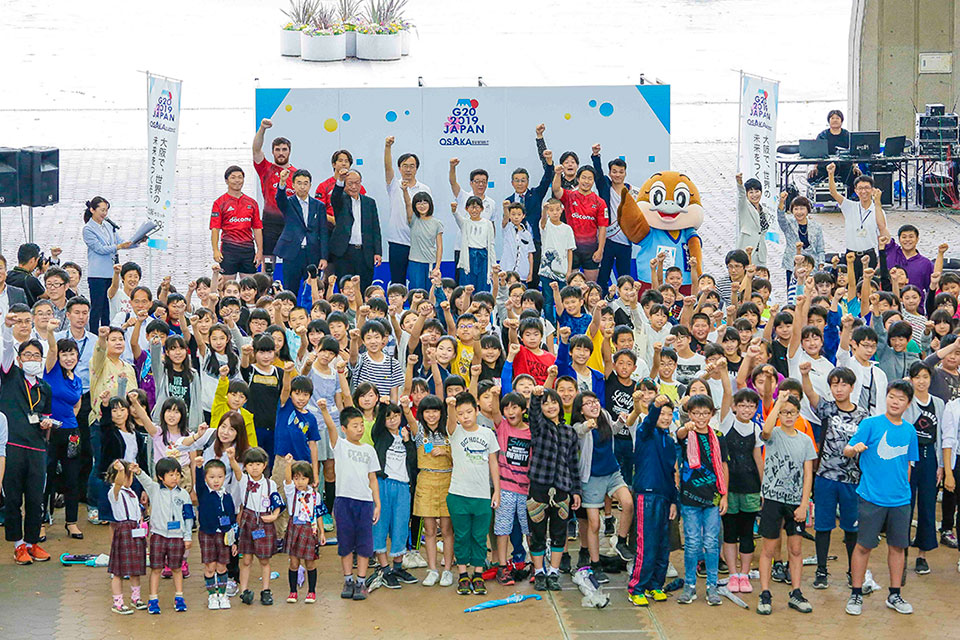 With less than a month until the G20 Osaka Summit, organizers launched the "G20 Osaka Summit Clean-up Campaign: Sakishima Kickoff" on May 28 to clean up INTEX Osaka, the Summit venue, for global leaders.

The Clean-up Campaign event, held in support of the Osaka Declaration Toward Zero Plastic Waste, puts the focus on marine plastic waste, one of the G20 agenda issues. Some 120 pupils from the nearby Nanko Sakura and Nanko Hikari Elementary Schools participated in the event, which afforded the opportunity to broaden awareness of the significance of hosting the G20 Summit in Osaka.

Osaka Prefectural Governor Hirofumi Yoshimura, Chairman of the Kansai Promotion Council for the 2019 G20 Osaka Summit, greeted attendees, declaring that, "I am absolutely delighted that Osaka is able to host this international meeting. Let us welcome everyone from around the world to our beautiful Osaka. Osaka Mayor Ichiro Matsui, Deputy Chairman of the Kansai Promotion Council, also told that, "Media representatives around the world will gather in Osaka. I would like to convey Japan's splendor and Osaka's virtues with a spirit of hospitality." Takeshi Akahori, Secretary-General for the G20 Summit from Ministry of Foreign Affairs, similarly referred to Osaka's spirit of hospitality in his appeal, commenting that "There is only one month to go. I would like to ask for your continued appreciation and support of this event." 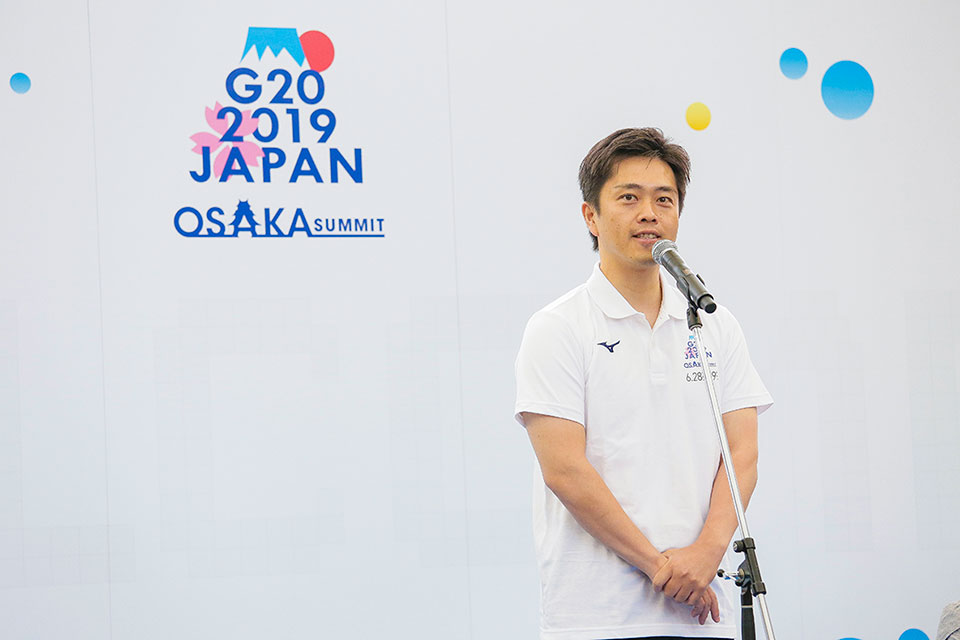 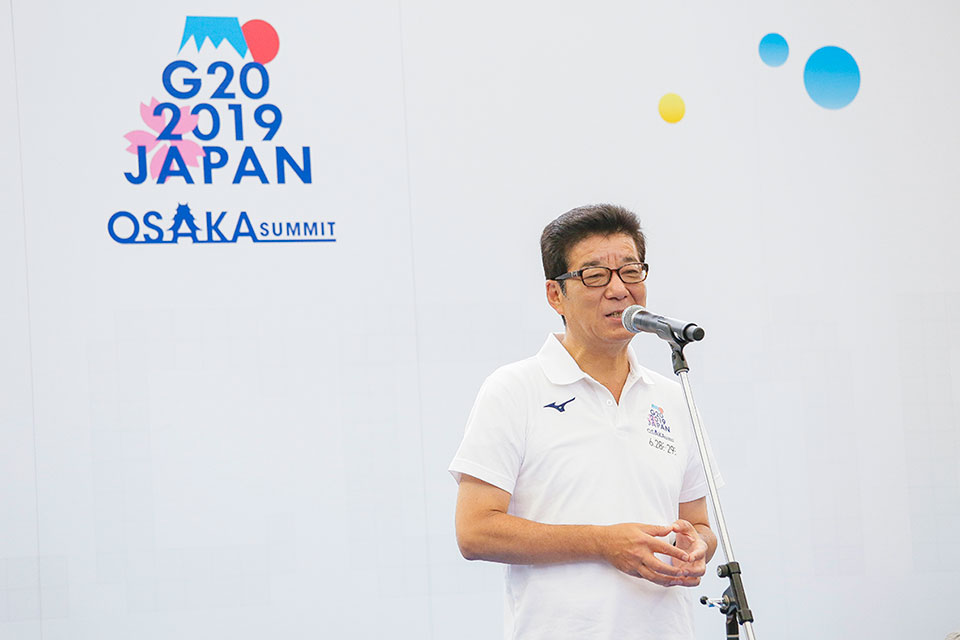 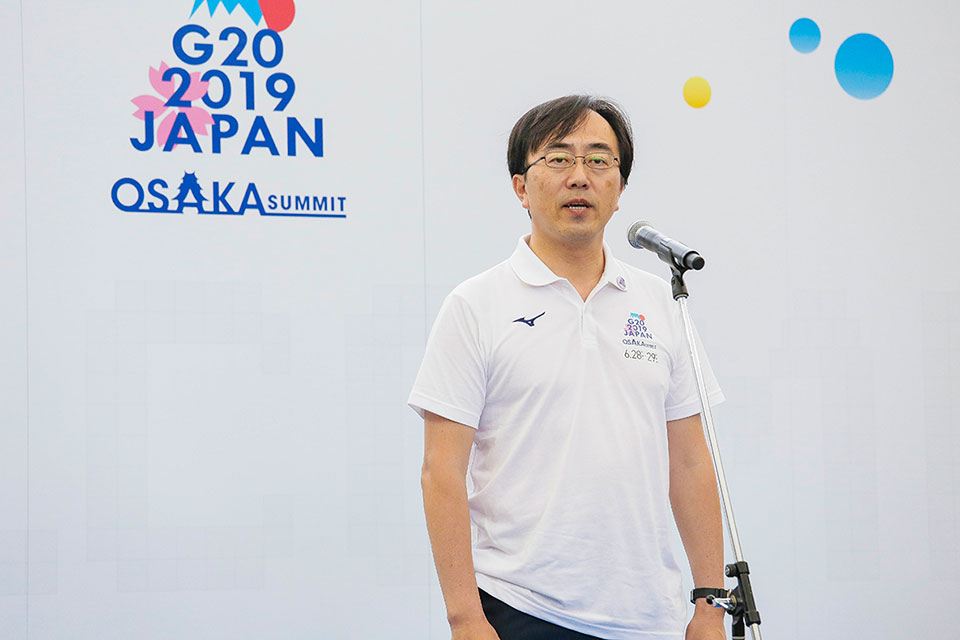 Takeshi Akahori, Secretary-General for the G20 Summit from the Ministry of Foreign Affairs of Japan

Related Events 02 Creating a "Welcome Board" to convey warm hospitality

Katsuhisa Mita, Chairperson of the Osaka Prefectural Assembly, Keiji Nishi, the Assembly's Vice-Chairperson, Kazumi Hirota, President of the Osaka City Council, Junko Arimoto, the Council's Vice-President, and Noboru Nishihara, Head of Osaka's Suminoe Ward participated in this event. Rugby players from the NTT Docomo Red Hurricanes, an Osaka-based rugby team also joined this event. Kouki Shigeno, team captain, rallied the audience, saying, "Let's get ready to offer a cheerful welcome to the leaders of each member." Meanwhile, students representing Nanko Sakura and Nanko Hikari Elementary Schools voiced expectations, describing the G20 Summit as "an opportunity to tell Osaka and Nanko" and "a chance for us to learn more about the world and enjoy more international exchanges." 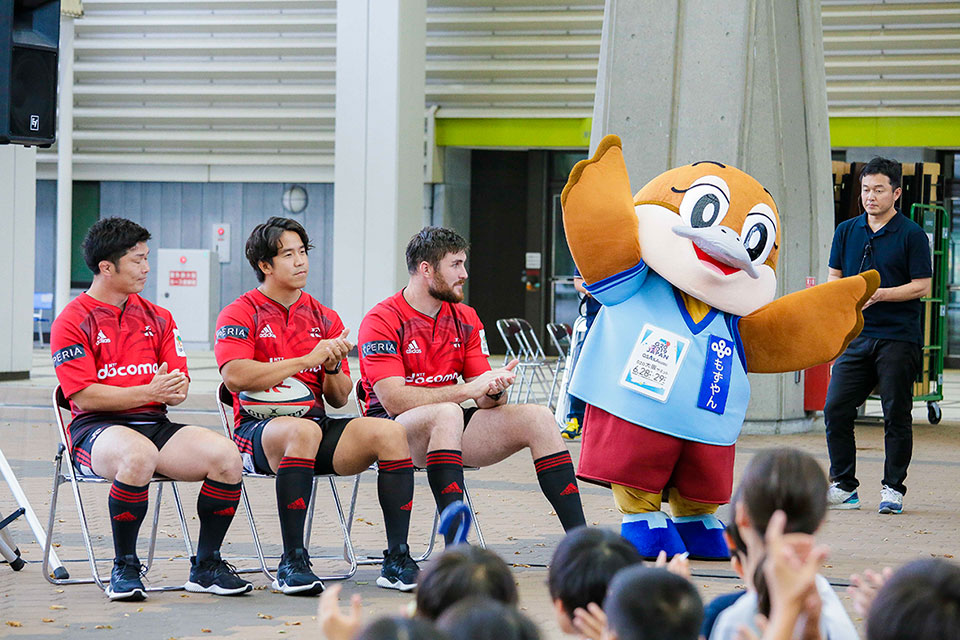 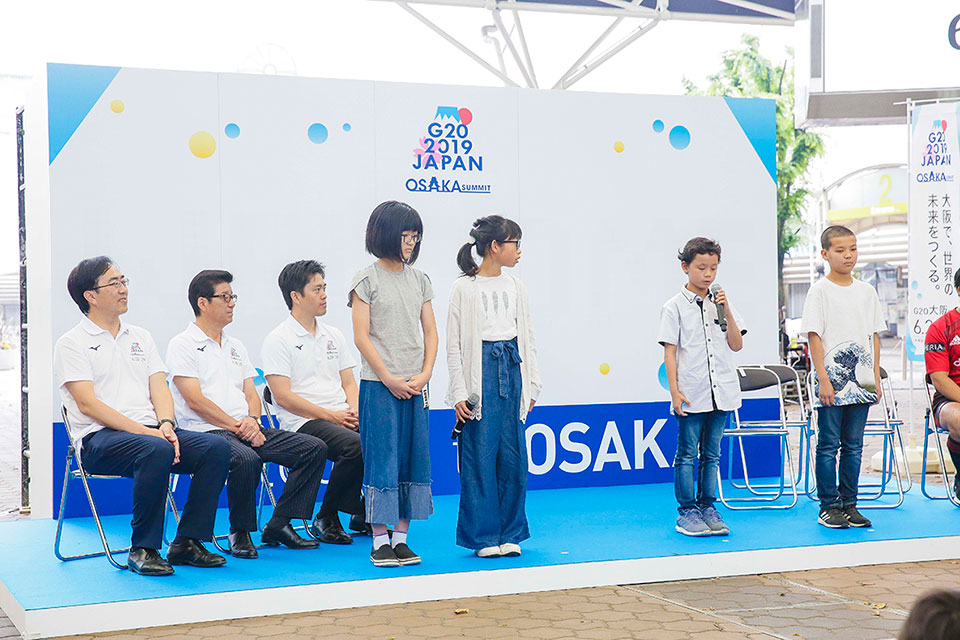 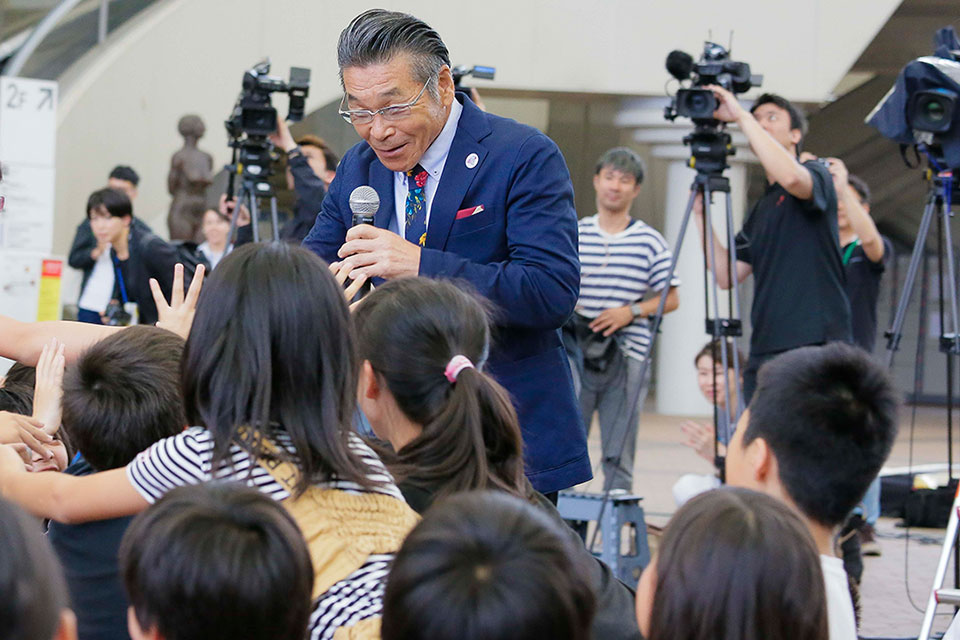 Comedian Kanpei Hazama appeared, walking between the rows of elementary school children. He made the audience chuckle as he joked: "When I heard that some 30,000 world leaders and members of the media would come to Japan, I thought that we should kindly invite each one of them to try a takoyaki octopus ball!" 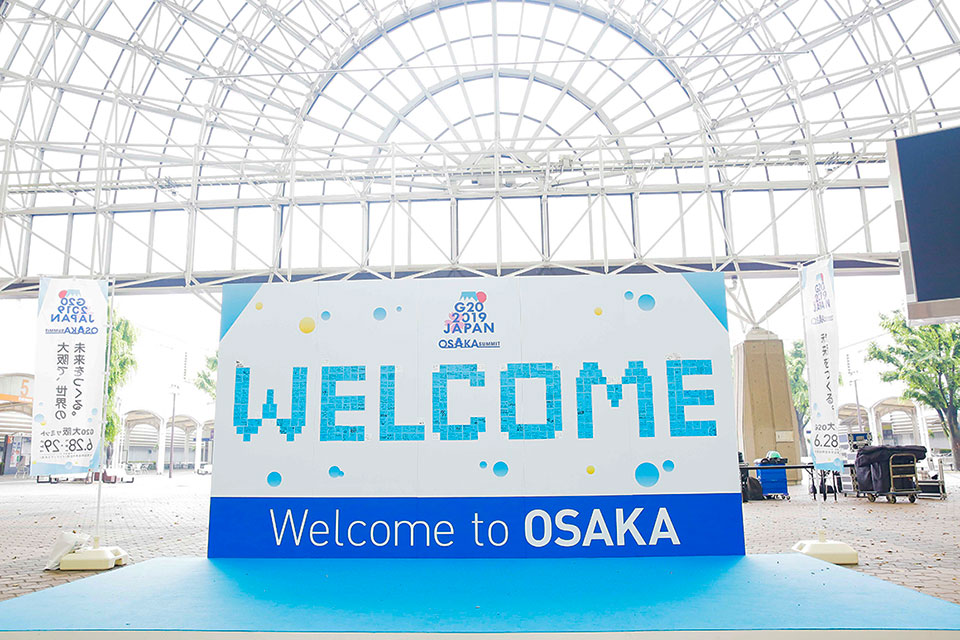 "Raimei," entertainer and Suminoe Ward resident, and "Mozuyan," the Osaka Prefectural mascot and honorary Vice-Governor were also welcomed on the stage. They attached their message cards to the Welcome Board, which will be installed on the opening day of the Summit in INTEX Osaka, the G20 venue, to convey a warm welcome to global leaders when they arrive. 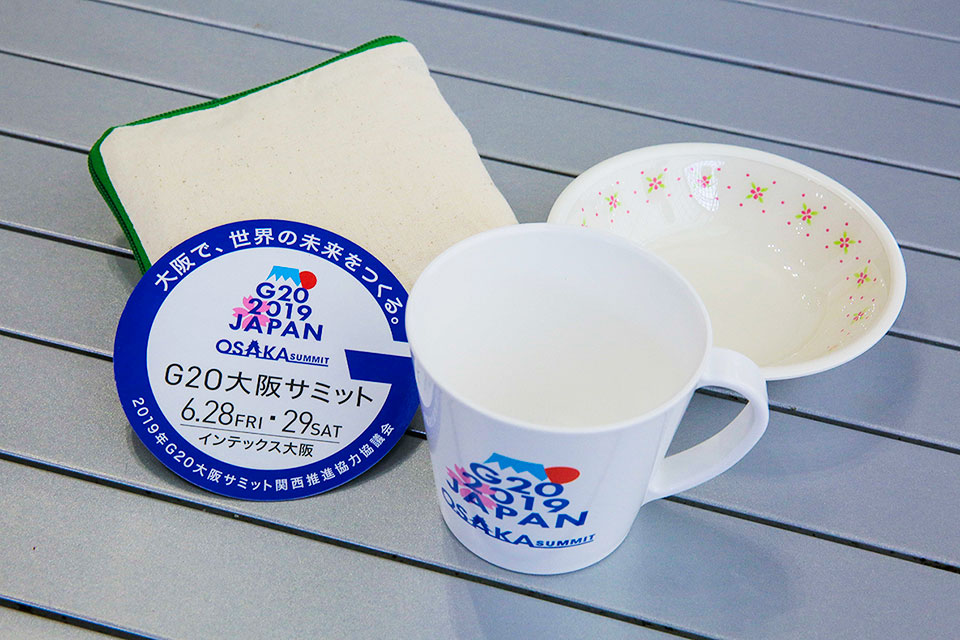 The "marine plastic waste" problem is caused by plastics such as beverage containers and supermarket bags which are carried by wind and rain along rivers and out to the sea, where they become pollutants. A speedy resolution of this issue has been called, as it results in damage to marine life and other serious problems. Displays explained in plain words were created for the participating elementary school students on topics such as waste sorting, recycling, and the importance of clean-up efforts.

Participants who created message cards were presented tableware made from recycled plastic beverage containers along with eco-friendly shopping bags.

The clean-up was held on May 29. Over 100 individuals from nearby businesses and municipal employees took part in picking up refuse. Similar "G20 Osaka Summit Clean-up Campaign" events will be held throughout the city in the coming days. 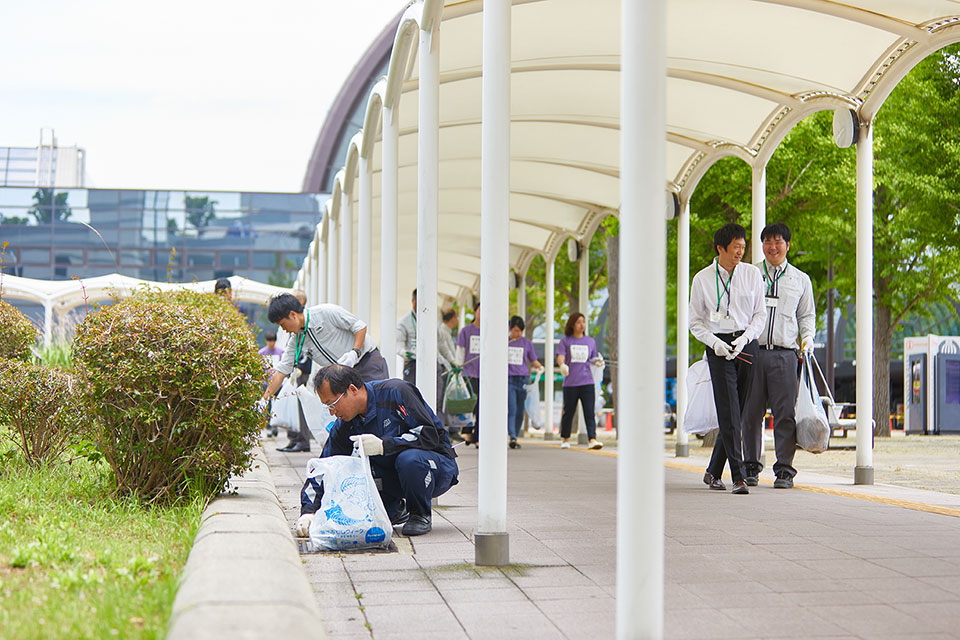 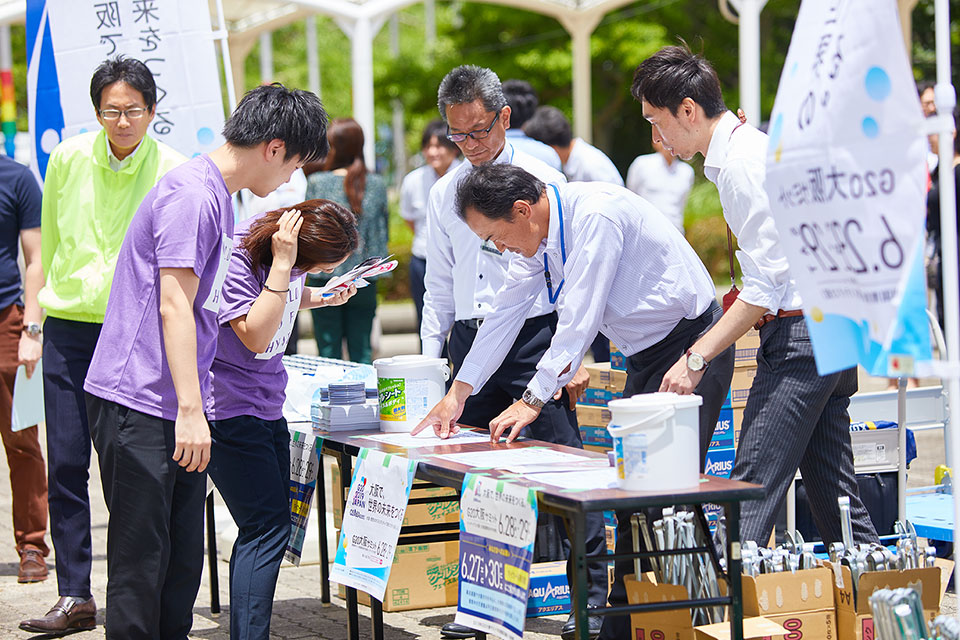