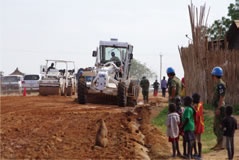 Authorized by UN Security Council (or General Assembly) Resolutions, UN PKOs support the peaceful resolution of conflict and recovery/reconstruction after ceasefire through diverse missions such as ceasefire monitoring to prevent a relapse into conflict and infrastructure development for further peacebuilding.

As of February 2015, Japan has deployed a total of more than 10,000 personnel to 13 UN PKOs. Around 350 SDF personnel are currently deployed to the UN PKO mission in South Sudan where they are developing infrastructure, supporting internally-displaced persons (IDP), and establishing UN facilities. 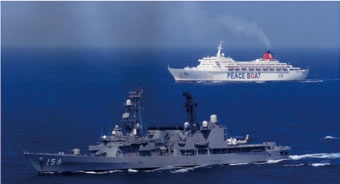 Anti-piracy operations off the coast of Somalia and in the Gulf of Aden.
© MOD

The SDF has conducted anti-piracy operations since 2009 in order to ensure the safe passage of ships. Additionally, the SDF has participated in the Combined Task Force 151 (CTF-151) from 2013, and has been conducting zone defense and patrol flights. Furthermore, from the end of May 2015, a Maritime SDF officer has been serving as the commander of the CTF-151. 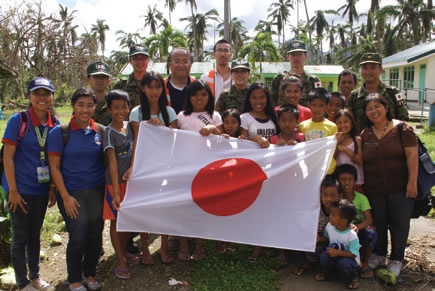 In response to the typhoon disaster in the Philippines in November 2013, in addition to dispatching Japan Disaster Relief Medical Team and expert teams, Japan also dispatched its largest-ever contingent of SDF Unit of approximately 1,200 personnel.

Based on the drastic change of the environment surrounding Japan, as well as the fact that development problems are becoming more diverse, complex and widespread, the Government of Japan revised the ODA Charter for the first time in approximately 12 years and decided on the Development Cooperation Charter. Based on the new Charter and under the policy of “Proactive Contribution to Peace” based on the principle of international cooperation, Japan will contribute even more proactively to peace, stability and prosperity of the international community through “all Japan” cooperation that includes collaboration with the private sector and others. Specifically, Japan will proactively and strategically promote development cooperation with the goals of achieving “quality growth” and poverty eradication through such growth, sharing of universal values, realizing a peaceful and secure society, and building a sustainable and resilient international community through efforts to address global challenges.