While firmly following the path of a peace-loving nation, Japan, as a major player in the international community, will put the policy of “Proactive Contribution to Peace” into practice as well as work closely with the countries concerned including the United States.

Changes in the environment surrounding Japan 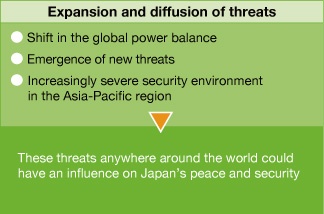 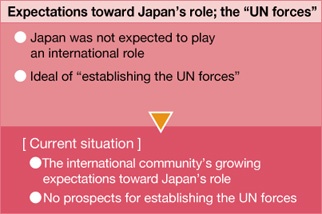 In today’s world, no country can secure its own peace and security only by itself
(The growing importance of partnerships with allies and like-minded countries as well as the UN collective security measures)

Under the policy of “Proactive Contribution to Peace” based on the principle of international cooperation, Japan will contribute even more proactively in securing peace, stability and prosperity of the international community while achieving its own security as well as peace and stability in the region.