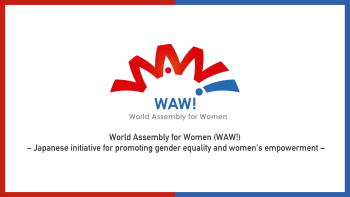 This conference is one of the efforts to realize gender equality and women’s empowerment, continue to be one of the priority issues of the Government of Japan. Having many leading figures from all over the world in the conference, we are expecting to have lively discussions on various women's issues including women’s empowerment. WAW! is scheduled to be held as a platform of discussion about gender-related issues. 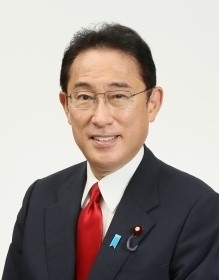 In recent years, the international community has placed greater emphasis on gender mainstreaming, which aims to reflect a gender perspective in all policies and systems.

The perspective of gender mainstreaming will lead to the creation of a virtuous cycle of growth and distribution, which is the linchpin of the “New Form of Capitalism” proposed by the Kishida Administration, in a way that diversity generates further growth, and the benefits from that growth would be redistributed to the population with consideration for the rights of all people, including women. To achieve this, I have put women's economic independence at the core of the "New Form of Capitalism" policy.

With this idea in mind, we set the main theme of WAW!2022 as "WAW! for Mainstreaming Gender into a New Form of Capitalism." We also set up diverse breakout sessions on topics, including relief for women from the COVID-19 pandemic and women under conflicts and disasters, and the role of men.

On 3 December 2022, WAW!2022 will be held for the first time in nearly three years, welcoming participants from around the world to discuss challenges women are facing and share their countries' efforts to resolve these issues. We hope to achieve the economic growth and peace established with a diverse and inclusive society in Japan and throughout the world.

Let us take a new and powerful step together toward the realization of a peaceful and prosperous society in which every person can feel fulfilled, take on challenges, play an active role, and live their own life.

Date (To be livestreamed online)

Concept Note and Program of WAW!2022

Program・Links for the live stream

We designated from October 3, 2022 to February 5, 2023 as "WAW! Weeks"! We invited those who would be organizing gender-related events (any form) which generate movements for gender equality and women’s empowerment to register with us to have your events recognized as an official side event for WAW! Weeks. 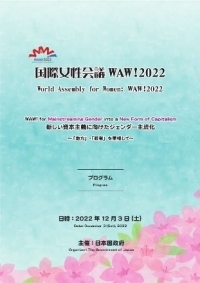 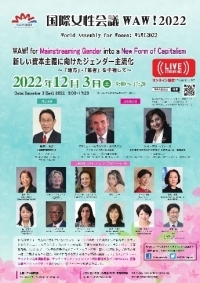 Poster
Page Top
Back to Women's Empowerment and Gender Equality