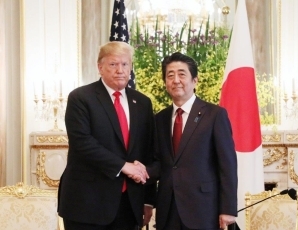 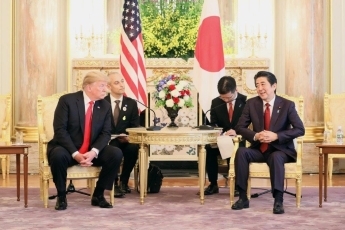 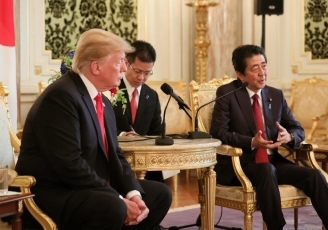 In the opening remarks, Prime Minister Abe wholeheartedly welcomed the visit by President Trump and Mrs. Trump to Japan as the first State Guests in the era of Reiwa. In response, President Trump stated that it was his honor to make the first State Call on Their Majesties the Emperor and Empress of Japan in the new era and expressed his gratitude to the welcome by the Japanese people.
The two leaders shared the view that the Japan-U.S. Alliance is stronger than ever before and is now the closest alliance in the world, thanks to the recent measures to strengthen the Alliance including Japan’s Legislation for Peace and Security as well as the strong personal relationship between the two leaders. The two leaders also confirmed their determination to continue to further strengthen the unwavering bond between Japan and the U.S. and to lead the peace and prosperity of the region and international community as true global partners in the new era.

The two leaders closely coordinated their policies in light of the recent developments surrounding North Korea, spending adequate time. The two leaders reconfirmed that Japan and the U.S. completely share their position including the need to ensure the full implementation of the United Nations Security Council (UNSC) resolutions.
Prime Minister Abe expressed his gratitude to President Trump for meeting once again with family members of the victims abducted by North Korea following the last meeting which took place during President Trump’s previous visit to Japan (November 2017). Prime Minister Abe expressed his determination to meet face to face with Chairman Kim Jong-Un towards the resolution of the abductions issue. Prime Minister Abe stated that he would like to meet with Chairman Kim Jong-Un without attaching any condition and talk candidly and frankly. In response, President Trump expressed his full support for Prime Minister Abe’s determination.

President Trump explained measures by the U.S. to raise tariffs on China. Prime Minister Abe expressed support to the continuation of the negotiation between U.S. and China toward the resolution of the outstanding issues and stated his hope that the issues will be solved in a constructive manner.
The two leaders affirmed the importance of continuing constructive dialogue with the Chinese government including in the area of security and economy.

The two leaders discussed regional affairs, and reaffirmed the importance of U.S. presence in the region based on the Japan-U.S. Alliance, as well as of U.S. engagement and commitment in the region. Both leaders expressed concern regarding the current situation in the East and South China Sea, and that Japan and the U.S. would continue to coordinate together on this issue.
The two leaders agreed to continue to strengthen and expand efforts to build a regional network between allies and friendly nations, including between and among Japan-U.S.-India, Japan-U.S.-Australia as well as Japan-U.S.-Australia-India.

The two leaders welcomed steady progress of cooperation between Japan and the U.S. (English (PDF)

of September 2018, and shared the view that they will have the two ministers further accelerate their discussions based on mutual trust between Japan and the U.S. to accomplish an early and win-win achievement for both Japan and the U.S.
In addition, the two leaders reaffirmed Japan-U.S. bilateral cooperation as well as Japan-U.S.-E.U. trilateral cooperation to address unfair trading practices.