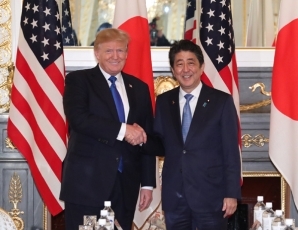 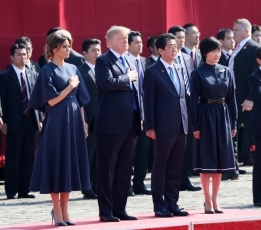 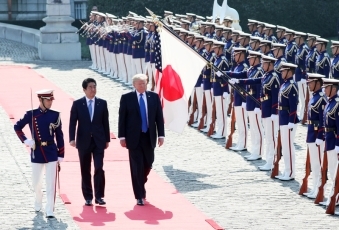 On November 6, Mr. Shinzo Abe, Prime Minister of Japan, held a working lunch and summit meeting with the Honorable Donald J. Trump, President of the United States of America. The overview of the meetings is as follows.

(2) In opening remarks, Prime Minister said as follows:
I would like to express my heartfelt condolences and sympathy for your loss and also to those people who lost their lives or were hurt in the shooting incident in Texas. I would once again like to wholeheartedly welcome the visit of President Trump and the First Lady to Japan. Yesterday, we enjoyed playing golf and also had a great time over dinner. Today I look forward to having candid discussions to cover the issue of North Korea and other global challenges. The Japan-U.S. alliance is the foundation for peace and prosperity in the Asia-Pacific region and the world. Through the visit of the President to Japan this time, we would like to make the alliance firmer and unwavering one.

(3) In response, President Trump said as follows:
It has been absolutely great two days. Prime Minister Abe has become my very close friend. To be with Prime Minister and Mrs. Abe was something very special. To have the privilege of playing golf with Prime Minister Abe and Mr. Hideki Matsuyama was great. The time that we spent together has been very fruitful. From now we will be discussing trade, North Korea, and others. It has been very special two days. On behalf of the United States of America, I would like to thank Prime Minister and Japan. We expect for a relationship that is even better than we have ever had before.

(4) The two leaders then engaged in discussions on matters relating to bilateral security, including North Korea, the regional situation and Okinawa.

(1) Following the working lunch, commencing at around 1:30 p.m. for approximately 35 minutes, a Japan-U.S. summit meeting was held. In addition to the attendees of the lunch, Mr. Taro Aso, Deputy Prime Minister, and Mr. Hiroshige Seko, Minister of Economy, Trade and Industry, etc. participated in the meeting.

(2) In opening remarks, Prime Minister Abe said that over the working lunch, the two leaders held in-depth discussions on the issue of North Korea and other various international challenges, and that he looked forward to continuing discussions in this summit meeting on the regional situation, economic issues, and bilateral relations.

(3) In response, President Trump said that the working lunch had been a very good meeting, in which productive discussions took place particularly pertaining to trade, North Korea and a couple of other subjects . He mentioned his confidence in correction of the trade imbalance. He also noted that great friendship had been built with Japan.

(4) In the summit meeting, the two leaders continued to discuss the regional and international situation and economic issues.

The results of Japan-U.S. Working Lunch and Japan-U.S. Summit Meeting are as follows:

The two leaders confirmed that both countries are 100% together on the issue of North Korea, and that the U.S. commitment to the region is unwavering, backed by the U.S. presence based on the robust Japan-U.S. Alliance. President Trump also reconfirmed the ironclad U.S. commitment to Japan’s defense through the full range of U.S. military capabilities, both nuclear and conventional.

The two leaders shared the view that now is not the time for dialogue, that maximum pressure must be applied to North Korea, and the recognition that North Korea will not see a bright future unless it changes its course of actions toward denuclearization.

Both leaders highly appreciated the fact that more countries have taken measures to downscale diplomatic and economic ties with North Korea and minimize the number of North Korean overseas workers in their countries. Both leaders also reaffirmed that they intend to continue to work together closely to this end.

Both leaders reaffirmed that the full implementation of the relevant UN Security Council resolutions on North Korea is imperative and confirmed that they intend to encourage related countries including China and Russia, including through direct engagement with their counterparts, so that the international community as a whole maximizes pressure on North Korea.

The two leaders confirmed that a free and open maritime order based on the rule of law is a cornerstone for peace and prosperity of the international community and called on all states to respect freedom of navigation and overflight and other internationally lawful uses of the seas, and reiterated that both countries intend to continue to fly, sail, and operate wherever international law allows. The two leaders stressed the importance of the Indo-Pacific region, which is the core of the vitality of the world with its vast population and economic dynamism.

In addition, both leaders affirmed that Japan and the United States will work together to promote peace and prosperity in the region by developing the Indo-Pacific as free and open and directed relevant ministers and institutions to flesh out detailed cooperation, in particular, in the following areas:

Both leaders reiterated that they will cooperate with any country that shares this vision of a free and open Indo-Pacific.

The two leaders expressed concern about the situation in the East and South China Seas and they reaffirmed their opposition to unilateral coercive actions that could alter the status quo and increase tensions. They reiterated that maritime disputes should be settled peacefully in accordance with international law. Taking note of the progress of discussion of the Code of Conduct in the South China Sea (COC), they emphasized the importance of demilitarization of the disputed features in the South China Sea.

The two leaders welcome China’s positive contribution to regional and global peace and prosperity, and stressed the importance for Japan and the U.S. to continue constructive dialogue with China.

President Trump reaffirmed the unwavering support of the United States for Japan’s permanent membership on a reformed UN Security Council.

The two leaders shared the view that they intend to continue to work toward enhancing the deterrence and response capabilities of the Japan-U.S. Alliance amid an increasingly severe security environment in the region. Along with appreciating the achievements made at the Japan-U.S. Security Consultative Committee (Japan-U.S. “2+2”) held in August 2017, they directed relevant ministers to continue to follow up with these achievements. The two leaders reaffirmed the commitment to the realignment of the U.S. forces in Japan in accordance with previous affirmations , maintaining operational and deterrent capability of U.S. forces in Japan Both leaders reconfirmed that the relocation of Marine Corps Air Station (MCAS) Futenma to Henokosaki is the only solution that avoids the continued use of MCAS Futenma and called for the steady implementation of the construction plan of the Futenma Replacement Facility (FRF), noting the adverse impact of further delays on the ability to provide for peace and security. Prime Minister Abe stated that it is essential to be responsive to local communities’ concerns regarding incidents, accidents and other issues. Both leaders reaffirmed the importance of engaging local communities about the purpose of training and of allaying concerns about safety.

The two leaders welcomed that Deputy Prime Minister Aso and Vice President Pence confirmed the importance of strengthening bilateral economic, trade and investment ties at the second round of the Japan-U.S. Economic Dialogue held on October 16. They shared the view that both countries intend to take the initiative to establish high-standard trade and investment rules, advance cooperation on enforcement of unfair trade practices in third countries, and take a strong lead in supporting development and investment in the region and the world.

In addition, the two leaders confirmed to address the following matters in the field of trade and investment with a view to further strengthening the Japan-U.S. economic relationship.


The two leaders shared the view to carry forward the “Japan-U.S. Strategic Energy Partnership” within the framework of the Japan-U.S. Economic Dialogue. They also highlighted their commitment to cooperate on investment opportunities in energy, infrastructure, and other critical sectors to support development in emerging markets. Moreover, they shared the view that cooperation should take place between the relevant bodies that will jointly carry out infrastructure development in third countries.

Furthermore, the two leaders welcomed that investment to the United States by Japanese companies remains at a high level, and shared the view to promote two-way trade between Japan and the United States.

The two leaders took note of the signing of MOCs in the field of health and the housing for aging population. They also recognized the space cooperation between Japan and the United States and noted the holding of the second International Space Exploration Forum on March 3, 2018 in Tokyo. The two leaders shared the view that both countries will promote further cooperation in such areas as the exploration of space, health, and “aging in place.”

The two leaders shared the view to further enhance grassroots-level exchanges and dissemination of information in various parts of the United States.