Second Round of the Japan-U.S. Economic Dialogue between Deputy Prime Minister Aso and Vice President Pence of the United States of America 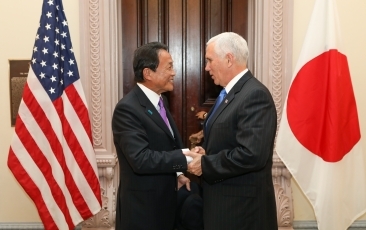 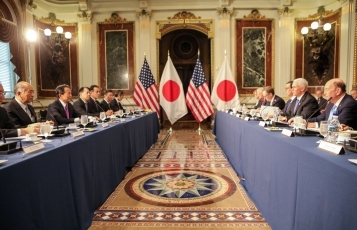 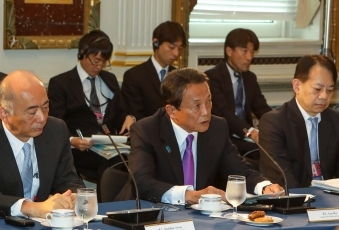 Deputy Prime Minister Aso and Vice President Pence appreciated that working-level officials from both Japan and the United States have been holding energetic discussions since the first round of the Economic Dialogue, in order to obtain concrete results along the three pillars that were confirmed at the first round of this dialogue. It was also confirmed that North Korea poses an unprecedented, grave and imminent threat, and amid the increasingly severe security environment in the Asia-Pacific region, it is important to pursue constructive dialogue from here forward in order to further deepen the Japan-U.S. economic relationship, which is of great strategic importance.

With regard to bilateral trade issues, both sides confirmed (1) that restrictions on Japanese persimmons and on U.S. potatoes from Idaho were lifted, and (2) that Japan will streamline noise and emissions testing procedures for U.S. automobile exports certified under Japan’s Preferential Handling Procedure (PHP) in the area of automobile trade. Furthermore, both sides also confirmed that Japan will (3) ensure transparency and fairness in its system for geographical indications (GIs) in accordance with its domestic law and procedures, and will (4) ensure transparency continuously with respect to reimbursement policies related to life sciences innovation.

Additionally, both sides confirmed that technical-level work is underway to strengthen  effective enforcement activities against unfair trade practices and to promote high trade and investment standards.

3 Cooperation in Economic and Structural Policies

Both sides (1) reaffirmed the active use of the three-pronged approach affirmed by the G7 members. Additionally, the two sides (2) shared recognition on the current state of the global economy and finance, including financial regulatory regimes, and that they will cooperate on the challenges, and (3) confirmed that both sides, as major shareholders in the multilateral development banks, will work closely together to promote sustainable and inclusive development, consistent with the highest international standards and debt sustainability.

Deputy Prime Minister Aso and Vice President Pence welcomed that effective and broad-ranging discussions are taking place in working groups set up by both sides in sectors where it will be possible to promote economic benefits and job creation in both countries, and that both sides are attaining concrete achievements that are enabling the win-win relationship between Japan and the United States to be further strengthened.

Deputy Prime Minister Aso and Vice President Pence welcomed that meaningful and constructive discussions had taken place. Moreover, sharing the importance of continuing the Japan-U.S. Economic Dialogue, they shared the view that the schedule for the next Dialogue will be coordinated at the working level on both sides.