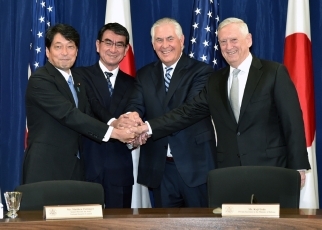 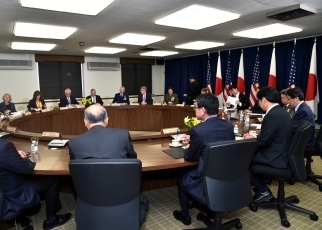 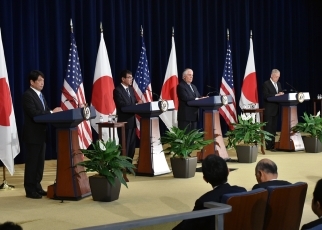 On August 17, commencing at 9:45 a.m. (U.S. time) for approximately 3 hours and 15 minutes, the Japan-U.S. Security Consultative Committee (SCC) (Japan-U.S. “2+2”) was convened in Washington D.C., the United States of America. The meeting was attended by Mr. Taro Kono, Minister for Foreign Affairs, and Mr. Itsunori Onodera, Minister of Defense, from the Japanese side, and the Honorable Rex Tillerson, Secretary of State, and the Honorable James Mattis, Secretary of Defense, from the U.S. side. The overview of the meeting is as follows.

1 Overview of the Japan-U.S. Alliance

(1) The four ministers welcomed the first “2+2” under the Trump administration. Amidst an increasingly severe security environment in the Asia-Pacific region, including North Korea’s nuclear development and launch of intercontinental ballistic missiles, as well as the situations in the East China Sea and the South China Sea, the four ministers reaffirmed their commitment to further strengthen the Japan-U.S. Alliance and reconfirmed that the Alliance continue to be the cornerstone of the regional peace and security.

(2) The four ministers reaffirmed the importance of the U.S. commitment to extended deterrence for peace and security of Japan and the region.

The four ministers had an in-depth exchange of views on the strategic environment in the Asia-Pacific region, including North Korea, the East China Sea and the South China Sea, and reaffirmed the robust commitment of Japan and the United States to the regional peace and security.

(1) Regarding the situation surrounding North Korea, the four ministers concurred that North Korea's nuclear and missile development is totally unacceptable and that it is necessary to apply more pressure on North Korea, including the strict and full implementation of the newly adopted United Nations Security Council resolution. The four ministers shared the view that they urge China and Russia to play a greater role, as well as to continue taking concrete measures to reinforce the defense posture of the Alliance and enhance its capabilities, in order to deter the threat of North Korea, while maintaining Japan-U.S. and Japan-U.S.-Republic of Korea (ROK) cooperation closely.

(2) The four ministers shared concerns over the situations in the East China Sea and the South China Sea.
The four ministers reaffirmed that Article 5 of the Japan-U.S. Security Treaty applies to the Senkaku Islands and that they oppose any unilateral action that seeks to undermine Japan's administration of these islands. Furthermore, the four ministers agreed that Japan and the United States will continue to work together for peace and stability in the East China Sea.
Regarding the situation in the South China Sea, the four ministers confirmed the significance of the continued engagement of Japan and the United States, including through respective activities to support freedom of navigation.

(1) The four ministers appreciated the steady deepening of the Japan-U.S. security and defense cooperation, and shared the view to develop measures to further enhance the deterrence and response capabilities of the Japan-U.S. Alliance. In particular, the four ministers shared the intent to identify specific measures to further strengthen the Alliance, including through reviewing the roles, missions, and capabilities of Japan and the United States respectively, to ensure seamless Alliance responses across a full spectrum of situations, and instructed their staffs to advance such work based on guidance from the ministers.

(2) In relation to this, Foreign Minister Kono expressed Japan's intention to expand its role and responsibilities based on Japan's Legislation for Peace and Security and the Guidelines for Japan-U.S. Defense Cooperation, and Defense Minister Onodera emphasized that it is necessary for Japan and the United States to firmly maintain their respective defense capabilities, and that Japan intends to strengthen its defense capabilities in various fields, particularly ballistic missile defense and defense of its southwestern islands, and to expand its role within the Alliance.

(3) The four ministers shared the intent to accelerate greater security and defense cooperation than ever before with the ROK, Australia, India and Southeast Asian countries. As part of such efforts, Foreign Minister Kono announced that Japan will implement assistance totaling approximately 500,000,000 U.S. dollars over three years, from 2017 to 2019, to support capacity building programs of maritime security for coastal states in the Indo-Pacific region.

(4) The four ministers shared the intent to steadily promote cooperation in areas of outer space and cyberspace, which are new frontiers for the Japan-U.S. Alliance.

(1) The four Ministers reconfirmed that it is essential to steadily advance the realignment of U.S. forces in Japan, from the perspective of mitigating the impact on local communities including Okinawa, while maintaining the deterrence of the Japan-U.S. Alliance, and gaining understanding from local communities.

(3) With regard to the incident involving an MV-22 Osprey aircraft and the various issues related to Kadena Air Base, Foreign Minister Kono and Defense Minister Onodera conveyed the Japanese Government's position, in consideration of the local communities' concerns, to the U.S. side.