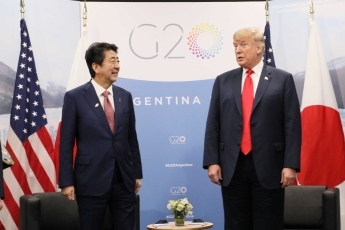 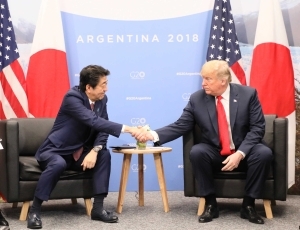 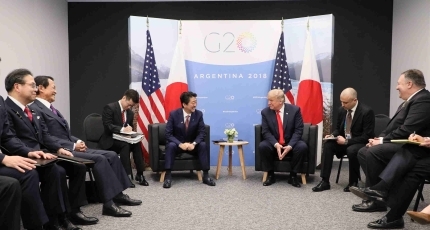 On November 30, commencing at around 1:50 p.m. (local time; December 1, 1:50 a.m., Japan time) for approximately 35 minutes, Mr. Shinzo Abe, Prime Minister of Japan, who was visiting the Argentine Republic to attend the G20 Summit, held a Japan-U.S. Summit Meeting with the Honorable Donald J. Trump, President of the United States. The overview of the meeting is as follows.

1. Prime Minister Abe and President Trump once again confirmed their recognition that under the robust relationship of trust between the two leaders, the Japan-U.S. Alliance is stronger than ever before, and shared the view that they will continue to strive to strengthen the Alliance.

2. The two leaders closely aligned their policies with regard to the issue of North Korea, and confirmed that Japan and the U.S, as well as Japan, the U.S, and the Republic of Korea, will continue to coordinate closely. In addition, the two leaders shared the recognition that the full implementation of United Nations Security Council (UNSC) resolutions continues to be necessary towards the complete denuclearization of the Korean Peninsula.
Furthermore, the two leaders confirmed that they will continue to cooperate closely to address ship-to-ship transfers prohibited by the UNSC resolutions.

3. Prime Minister Abe explained his visit to China last month, and the two leaders shared the view that it is important for Japan and the U.S. to work closely together on encouraging China to play a constructive role.

4. With regard to the economy, the two leaders reaffirmed that they will further expand trade and investment between Japan and the U.S. in a mutually beneficial manner, and realize economic development in a free and open Indo-Pacific (PDF)

region based on fair rules, in accordance with the Japan-U.S. Joint Statement (PDF)