Top > About Us > Diplomatic Archives > Holdings

The End of the Tokugawa Period 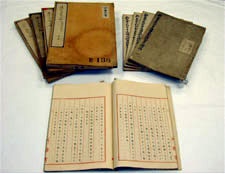 Tsushinzenran and Zokutsushinzenran are collections of diplomatic documents that are vital to the understanding of foreign policy in Japan at the end of the Tokugawa Shogunate. The 320-volume Tsushinzenran chronicles diplomatic documentation from 1859 to 1860. The succeeding Zokutsushinzenran is a compilation of documents from 1861 to 1868, edited and classified by the Foreign Ministry into categories such as friendship and commerce. Though started in 1871, compilation was completed only after work resumed in 1874 and it went on for the next 10 years. At present, 1,784 volumes are extant. 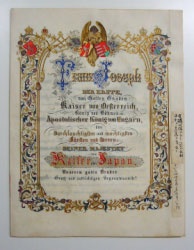 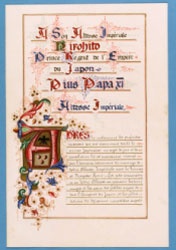 The Foreign Ministry records make up the largest part of the Diplomatic Archives’ archives. In addition to telegrams and official letters to and from overseas missions, invaluable documents reveal the hard work of diplomats and others involved in foreign affairs throughout the 80-year history of the Ministry until the end of World War II. The collection contains approximately 48,000 files, of which 22,000 are records of the Meiji and Taisho Periods classified into eight categories, such as political affairs, treaties, and commerce. Records of the Pre-war Showa Period number 26,000 files classified into 16 categories such as political and diplomatic affairs, treaties, and economic affairs. The Ministry also discloses to the public postwar documents that have been in custody for more than 30 years. Where the making public of records would be detrimental to important national interests or prejudicial to private individuals or entities, such records shall not be declassified and may not be made public. Documents have also been available on microfilm at the Archives since May 1976. 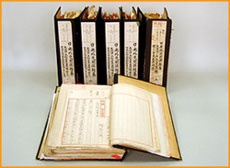 The Diplomatic Archives preserves some 600 treaties and conventions that were signed between the end of the Tokugawa Period and the end of World War II. The treaties cover the establishment of diplomatic relations, trade, political affairs, financial affairs, and many other issues. They include such bilateral treaties as the 1858 Treaty of Amity and Commerce with the U.S., and include the 1871 Treaty of Tientsin with China, the 1875 Treaty for the exchange of Sakhalin for the Kurile Islands with Russia, with Mexico, the 1895 Treaty of Peace with China, and the 1905 Treaty of Peace with Russia. Bilateral treaties are catalogued by name of nation; multilateral treaties are kept in chronological order. 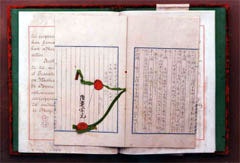 In addition to treaties, the Archives has in its archives some 1,100 letters and messages from various heads of states dated between the end of the Tokugawa era and the end of World War II. They include an 1861 letter from U.S. President Abraham Lincoln to the 14th Tokugawa Shogun Iemochi announcing the return of the U.S. diplomatic representative in Japan Townsend Harris and a personal message from Napoleon III of France to the Tokugawa shogun on the appointment of a new diplomatic representative in Japan.

Page Top
Back to Diplomatic Archives