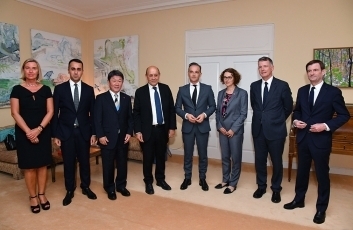 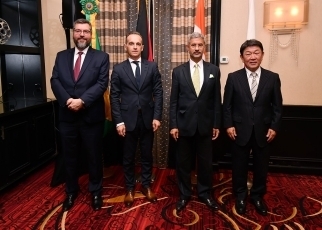 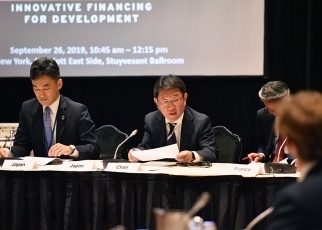 The G7 Foreign Ministers held free and lively discussions regarding issues currently facing the international community and regional situations, from the perspective of the G7’s continued coordination in the significantly changing international situation. In particular, the situation in Iran was discussed extensively as one of the pressing issues. The G7 countries expressed concern over the exacerbation of the situation, including attacks on the oil facilities in Saudi Arabia. In the face of the vast changes in the international situation, the Foreign Ministers confirmed the unity and continued solidarity of the G7 countries that share fundamental values.

At the Ministerial Meeting of the Global Governance Group (3G), which brings together 30 non-G20 countries, Minister Motegi briefed the participants on the outcomes of the G20 Osaka Summit under three pillars: initiatives for the Sustainable Development Goals (SDGs), innovation, and trade and investment. Many countries highly valued and expressed support for advancing such initiatives as the “G20 Principles on Quality Infrastructure Investment,” the “Osaka Track” which intends to promote international rule-making for data governance, including the discussions of electronic commerce at the World Trade Organization (WTO), as well as the “Osaka Blue Ocean Vision” which aims at reducing marine plastic litter.

The G4 Foreign Ministers reviewed the situation surrounding the UN Security Council reform. To achieve an early reform of the Security Council, they shared the willingness to work for improving the Intergovernmental Negotiations (IGN) process and continue their engagement with other like-minded countries. They also decided to accelerate coordination and consideration for their future efforts.
(Note: The G4 is a group comprised of four countries [Japan, Brazil, Germany, and India] aiming to reform the UN Security Council.)

The ministerial meeting was held for the first time among the four countries of Japan, Australia, India, and the United States. The four Ministers discussed their collective efforts to advance a free, open, prosperous, and inclusive Indo-Pacific. In addition, the four countries reaffirmed their shared commitment to close cooperation on maritime security, quality infrastructure, and connectivity in support of preserving and promoting a rules-based order in the region. Furthermore, they discussed cooperation including counter-terrorism, cyber security, and regional disaster response.

Japan, as this year’s Presidency of the Leading Group on Innovative Financing for Development, hosted the meeting of the Leading Group on Innovative Financing for Development. At the meeting, Minister Motegi stated that, in order to fill an annual funding gap of approximately 2.5 trillion dollars deemed to be necessary to achieve the SDGs, it was necessary to increase the momentum for further promotion of innovative financing. Minister Motegi then stated that Japan, as the G20 presidency, incorporated a strong text on the importance of innovative financing into the presidency statement, before engaging in active discussions among participants. Participating countries and organizations shared examples of innovative financing efforts, as well as their views on proactive approaches for cooperation toward financing expansion.

Minister Motegi announced Japan’s new contributions for UNRWA, which fulfills an important role for the stability of the Middle East, and this was highly valued by the participants. Ministers and representatives from various countries and organizations attended the meeting, and exchanged opinions concerning UNRWA’s financial shortfall and medium- to long-term strategies.

In light of the exacerbating situation due to the recent attacks on the oil facilities in Saudi Arabia, Minister Motegi and Dr. Zarif, Minister of Foreign Affairs of the Islamic Republic of Iran, candidly exchanged their views toward relieving tensions and stabilizing the situation in the Middle East. Minister Motegi expressed concern over the series of Iran’s actions to suspend their commitments under the Joint Comprehensive Plan of Action (JCPOA), and strongly urged Iran to refrain from taking measures that would undermine the JCPOA. The two Minister also exchanged views on their bilateral relations.

Minister Motegi and Ambassador Lighthizer, United States Trade Representative, confirmed the conclusion of Japan-U.S. trade negotiations. In addition, they confirmed that they will continue to coordinate, towards the early entry into force of the agreements that would be a win-win for both Japan and the United States.

Minister Motegi and Ms. Payne, Minister for Foreign Affairs of the Commonwealth of Australia, confirmed that they would work closely for further deepening the “Special Strategic Partnership” between Japan and Australia. In addition, the two Ministers confirmed that they would cooperate closely on the full implementation of UN Security Council resolutions toward complete denuclearization of North Korea, including tackling ship-to-ship transfers, and on the early resolution of the abductions issue. The two Ministers also exchanged views regarding matters such as cooperation for a “Free and Open Indo-Pacific,” the Pacific Island region, and the situation in the South China Sea.

Minister Motegi offered his congratulations on the success of the G7 Summit in Biarritz, and stated that he would like to build upon the successes of the G20 Summit in Osaka and G7 Summit in Biarritz to host the G20 Aichi-Nagoya Foreign Ministers’ Meeting. Minister Motegi also expressed his intention to continue strengthening cooperation between Japan and France, both of which are Indo-Pacific nations. Mr. Le Drian, Minister for Europe and Foreign Affairs of the French Republic, expressed his hope to continue to develop bilateral relations based on the Roadmap on Japan-France Cooperation for Opening New Horizons between Japan and France under an Exceptional Partnership (2019-2023) announced in June this year by Prime Minister Abe and President Macron. The two Ministers welcomed the First Japan-France Comprehensive Maritime Dialogue, held on September 20 in New Caledonia, and agreed to continue to promote Japan-France cooperation in the Indo-Pacific through such dialogues.

On the occasion of their first meeting, Mr. Lavrov, Minister of Foreign Affairs of the Russian Federation, congratulated Minister Motegi on his appointment as Foreign Minister. Minister Motegi expressed his intention as Foreign Minister, and also as the chief negotiator in charge of the Japan-Russia peace treaty, to engage in thorough consultations with Minister Lavrov, including on the joint economic activities. The two Ministers exchanged views on how to proceed with the negotiations on the peace treaty, and then shared the view on developing Japan-Russia relations in a wide range of areas, such as political matters, including the issue of concluding a peace treaty, as well as economy.

Minister Motegi and Mr. Pompeo, Secretary of State of the United States of America, held a one-on-one exchange of views, following up on the discussions at the Japan-U.S. Summit Meeting held the day before, and confirmed that Japan and the U.S. would continue to coordinate closely in addressing various issues of the region and the international community.

Minister Motegi and Mr. Safadi, Minister of Foreign Affairs and Expatriates of the Hashemite Kingdom of Jordan, held informal talks and shared the willingness to deepen bilateral cooperation in a wide range of fields at every level.

Minister Motegi and Dr. Kang Kyung-wha, Minister of Foreign Affairs of the Republic of Korea (ROK): (1) shared the importance of building the “future-oriented Japan-ROK relations”; (2) stated their respective position regarding the issues at hand; (3) confirmed Japan-ROK coordination on the issues such as North Korea; and (4) shared the view that Japan and the ROK would continue to maintain communication through diplomatic channels, including at the foreign ministers’ level.

Minister Motegi conveyed his condolences onthe recent attacks on the oil facilities in Saudi Arabia, and stated that it was a serious incident for Japan too, and that he had issued a Foreign Minister’s Statement that strongly denounced the attacks. Furthermore, Minister Motegi stated that, while it was difficult to assume that these attacks were carried out by the Houthis in light of their capabilities, Japan would continue to work together with Saudi Arabia including information gathering and analyses concerning the evaluation of this incident. In response, Mr. Assaf, Minister of Foreign Affairs of the Kingdom of Saudi Arabia explained the position of Saudi Arabia. The two Ministers shared the view that they would further strengthen bilateral relations with cooperation through the framework of “Saudi Japan Vision 2030.”

Minister Motegi exchanged views with Dr. Jaishankar, External Affairs Minister of India, regarding bilateral relations, the Regional Comprehensive Economic Partnership (RCEP), and regional situations. The two Ministers shared the view that they would work together towards strengthening Japan-India relations, and in particular, to ensure that Prime Minister Abe’s next visit to India will be a special occasion.

At the outset, Mr. Wang Yi, State Councilor and Foreign Minister of the People’s Republic of China, congratulated Minister Motegi on his appointment. Expecting President Xi’s state visit to Japan next spring, the Ministers affirmed that they will elevate the Japan-China relations to a new stage and open up “a new era of the relationship” by continuing the high-level reciprocal visits, while appropriately managing the various issues and further developing bilateral exchanges and cooperation.