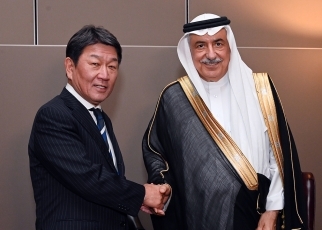 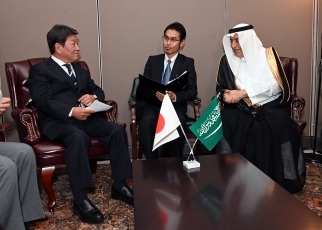 On Thursday, September 26, commencing at around 4 p.m. (local time) for approximately 30 minutes, Mr. MOTEGI Toshimitsu , Minister for Foreign Affairs of Japan, who is visiting New York to attend the 74th Session of the United Nations (UN) General Assembly, held a Foreign Ministers’ Meeting with H.E. Dr. Ibrahim Al-Assaf, Minister of Foreign Affairs of the Kingdom of Saudi Arabia. The overview of the meeting is as follows.

1. Minister MOTEGI conveyed his sympathies for the recent attacks on the oil facilities in Saudi Arabia, and stated that it was a serious incident for Japan too, and that he had issued a Foreign Minister’s Statement and strongly denounced the attacks. Furthermore, he stated that it is difficult to assume that these attacks were carried out by the Houthis in light of its capabilities but Japan would continue to work together with Saudi Arabia including information gathering and analyses concerning the evaluation of this incident. Moreover, he commended the efforts of the Government of Saudi Arabia and Saudi Aramco to maintain and restore the oil production.

2. In response, Minister Assaf explained the position of Saudi Arabia.

3. Minister MOTEGI stated that Japan would continue to support the reforms that Saudi Arabia is advancing through “the Saudi Vision 2030 (PDF)