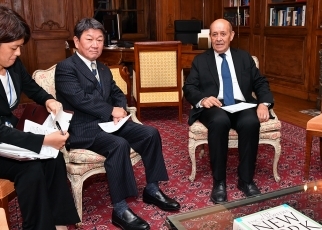 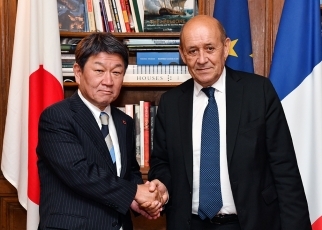 On September 24, commencing at about around 7:50 p.m. local time, Mr. Toshimitsu Motegi, Foreign Minister of Japan, who was visting New York to attend the United Nations General Assembly, held a Foreign Ministers’ Meeting with H.E. Mr. Jean-Yves Le Drian, Minister for Europe and Foreign Affairs of the French Republic for approximately 30 minutes. The overview of the meeting is as follows.

(1)Minister Le Drian congratulated Minister Motegi on the assumption of his new post, and expressed his hope to continue to develop bilateral relations based on the Roadmap on Japan-France Cooperation for Opening New Horizons between Japan and France under an Exceptional Partnership (2019-2023) announced in June this year by Prime Minister Abe and President Macron.

The two Ministers welcomed the First Japan-France Comprehensive Dialogue on Oceans, held on September 20 in New Caledonia, and agreed to continue to promote Japan-France cooperation in the Indo-Pacific through the said and other dialogues.

The two Ministers discussed the situation in the Middle East, and confirmed to continue close exchange of views in order to ease tensions in the region.