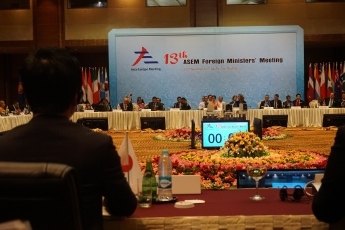 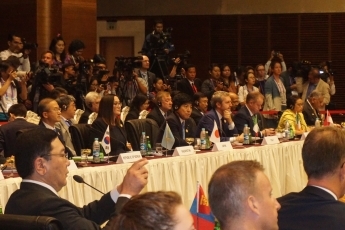 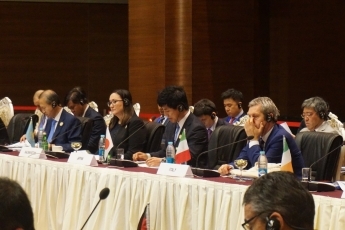 The 13th Asia-Europe Meeting (ASEM) Foreign Ministers’ Meeting (ASEM FMM13) was held in Nay Pyi Taw, the Republic of the Union of Myanmar, on November 20 and 21, and Mr. Kazuyuki Nakane, State Minister for Foreign Affairs, took part in from Japan. The meeting brought together the foreign ministers, or their high-level representatives, of 51 countries and two organizations under one roof. They exchanged views on “Synergizing Peace and Sustainable Development” (Plenary Session 1), “3rd Decade of ASEM: Making ASEM Partnership more Dynamic and Connected” (Plenary Session 2), and “International and Regional Affairs” (Retreat Session), and a Chair’s Statement (English (PDF)

) was issued. The overview of the respective sessions is as follows.

(1) At the beginning, State Counsellor Aung San Suu Kyi, who served as Chair, stated that achieving the Sustainable Development Goals (SDGs) is essential to achieving peace, and mutual understanding is important in order to resolve problems. Following that, there were comments from the representatives of the Philippines, Pakistan and the European Union (EU), the chair countries of Asia and the European region respectively. Many countries mentioned the importance of international law and order based on rules, existing international security challenges such as the North Korea problem, the importance of the SDGs, as well as the importance of cooperation in the ASEM.

(2) As the third lead speaker at Plenary Session 1, State Minister Nakane explained the Free and Open Indo-Pacific Strategy, which is also important from the standpoint of the connectivity of Asia and Europe, and reiterated the importance of making the Indo-Pacific region, which stretches from the Asia-Pacific to the Indian Ocean connecting to the Middle East, Africa and Europe, free and open.
With regard to the North Korea problem, State Minister Nakane explained that now is the time for the international community as a whole to maximize pressure on North Korea, and also appealed for understanding and cooperation on the abductions issue.
With regard to maritime security, State Minister Nakane once again emphasized that a free and open maritime order based on the rule of law is important in every region, and with regard to the South China Sea issue, he expressed strong expectation that tensions will be eased as a result of efforts such as the prompt formulation of an effective Code of Conduct (COC) in the South China Sea, and that will advance demilitarization.

(3) In addition, State Minister Nakane introduced the “ASEM Seminar on Connectivity and Quality Infrastructure (tentative name)” that Japan is scheduled to host next year in the framework of the ASEM, and the “ASEF Public Health Network 2018” on the themes of universal health coverage (UHC) and Antimicrobial Resistance (AMR) that Japan is scheduled to co-host with the Asia-Europe Foundation (ASEF) next year, and called on member states to participate.

(1) At the beginning, State Counsellor Aung San Suu Kyi, who served as Chair, made introductory remarks, after which various countries made comments. Many countries noted the importance of strengthening connectivity between Asia and Europe, the importance of the ASEM as a venue for open dialogue and cooperation, as well as cooperation on cyber security and counterterrorism.

(2) As concrete efforts of Japan for strengthening connectivity in the ASEM, State Minister Nakane explained efforts to promote quality infrastructure, the “ASEM Symposium on Promoting Tourism,” which Japan is scheduled to co-host with Indonesia in the first half of next year, and the significance of free trade, including the Japan-EU Economic Partnership Agreement (EPA), and he called for member states’ cooperation.

(1) A discussion took place on new security challenges such as counterterrorism and cybersecurity, the North Korea problem and maritime security including the South China Sea, the situation in northern Rakhine State, regional affairs including the situation in the Middle East, and the refugee issue. The importance of the rule of law and dispute settlement based on international law was once again pointed out.

(2) State Minister Nakane further explained Japan’s position with regard to the North Korea problem encouraging countries to take action on this issue. He also introduced Japan’s initiatives in the areas of violent extremism and cybersecurity, and called for cooperation in the ASEM.