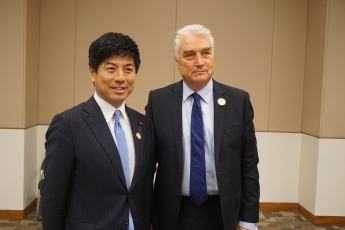 On November 20 (local time), Mr. Kazuyuki Nakane, State Minister for Foreign Affairs, who is attending the 13th ASEM (Asia-Europe Meeting) Foreign Ministers’ Meeting being held in the Republic of the Union of Myanmar, held a meeting with Mr. Andrej Logar, State Secretary, Ministry of Foreign Affairs of the Republic of Slovenia. The overview of the meeting is as follows.

1. State Minister Nakane noted that this year marks the 25th anniversary of the establishment of diplomatic relations between Japan and Slovenia, and expressed his pleasure that dialogue between the two countries has become close. He also explained that explained that Japan attaches importance to its relationship with Slovenia mentioning that Slovenia functions as a bridge between the European Union (EU) and the Western Balkans.

In response, State Secretary Logar explained that the Japan-Slovenia relationship has been growing in the political and economic fields over the past years, and he intends to continue to deepen cooperation.

2. Furthermore, State Minister Nakane explained Japan’s thoughts with regard to the Free and Open Indo-Pacific Strategy, the North Korea situation, and the rule of law, and sought understanding.

In response, State Secretary Logar stated that he supports Japan’s position, and with regard to North Korea, he expressed the view that concrete actions are required rather than dialogue for the sake of dialogue.

3. In addition, the two sides also exchanged views on the situation in the Western Balkans.