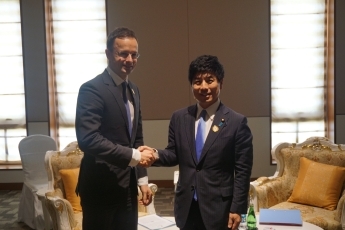 On November 20 (local time), Mr. Kazuyuki Nakane, State Minister for Foreign Affairs, who is attending the 13th ASEM (Asia-Europe Meeting) Foreign Ministers’ Meeting being held in the Republic of the Union of Myanmar, held a meeting with H.E. Mr. Péter Szijjártó, Minister of Foreign Affairs and Trade of Hungary. The overview of the meeting is as follows.

1. State Minister Nakane mentioned Japan’s contributions to Hungary’s economy, explained that he intends to cooperate with Hungary towards the 150th anniversary of the establishment of diplomatic relations between Japan and Hungary in 2019, and stated that he hopes to pursue further cooperation in order to increase mutual people-to-people exchanges.

In response, Minister Szijjártó expressed gratitude for Japanese companies’ direct investment, and explained that Hungary attaches importance to its relationship with Japan.

2. In addition, State Minister Nakane explained Japan’s thoughts with regard to the Free and Open Indo-Pacific Strategy, the North Korea situation, and the rule of law, and sought understanding. In response, Minister Szijjártó stated that he supports Japan’s initiative and position.

(Note) V4:
A framework for regional cooperation among the Czech Republic, Poland, Slovakia and Hungary, which was founded in Visegrád, Hungary, in 1991. In addition to holding foreign minister-level and high working-level dialogues with Japan, V4 plus Japan cooperation has also been pursued in fields such as economy and investment promotion, development cooperation, science and technology, and tourism. Hungary holds the V4 Presidency from July 2017 to June 2018.