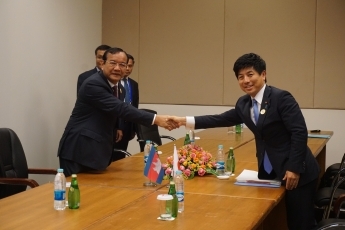 On November 20 (the same day local time), Mr. Kazuyuki Nakane, State Minister for Foreign Affairs, held a meeting with H.E. Mr. Prak Sokhonn, Senior Minister and Minister of Foreign Affairs and International Cooperation, Kingdom of Cambodia, in the Republic of the Union of Myanmar, during his visit to attend the 13th ASEM Foreign Ministers’ Meeting. The overview of the meeting is as follows.

1. State Minister Nakane mentioned that he visited Cambodia twice in 2015, when he was serving as Parliamentary Vice-Minister for Foreign Affairs, and expressed his intention, as State Minister, to strengthen the strategic partnership between Japan and Cambodia. Furthermore, State Minister Nakane explained that steady progress is being made to enhance Japan’s assistance in the areas of improvement of logistics, industrial human resource development and reinforcement of urban functions, as announced by Mr. Shinzo Abe, Prime Minister of Japan, during the visit to Japan by Samdech Akka Moha Sena Padei Techo Hun Sen, Prime Minister of the Kingdom of Cambodia, in August while citing specific examples. Additionally, State Minister Nakane stated that he intends to further increase the momentum for the improvement of bilateral relations, in view of the 65th anniversary of the establishment of diplomatic relations between Japan and Cambodia next year.

2. In response, Minister Prak Sokhonn expressed once again his deep gratitude for Japan’s assistance to date. In addition, he stated his intention to work with State Minister Nakane to follow up on the outcomes of Prime Minister Hun Sen’s visit to Japan.

3. Regarding political developments in Cambodia, State Minister Nakane expressed concern over the dissolution of the opposition party which received support from many Cambodian citizens at the previous election, and urged the Government of Cambodia to assure that the next year’s election will be conducted in a way that appropriately reflects the will of the people. In response, Minister Prak Sokhonn explained that the decision to dissolve the party was an appropriate application of domestic law and the freedom of political activities is assured in the country, and that the Government of Cambodia will maintain a multi-party democratic system.