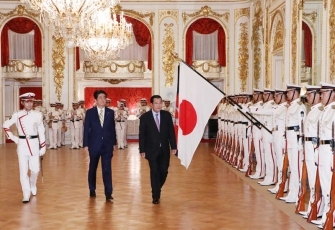 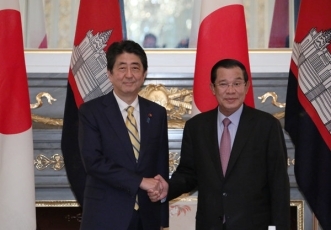 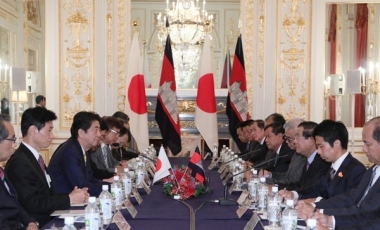 On August 7, commencing at shortly after 6:10 p.m. for approximately 75 minutes, Mr. Shinzo Abe, Prime Minister of Japan, held a summit meeting with Samdech Akka Moha Sena Padei Techo Hun Sen, Prime Minister of the Kingdom of Cambodia, who was paying an Official Working Visit to Japan, at the Akasaka State Guest House. The overview of the meeting is as follows. Mr. Yasutoshi Nishimura, Deputy Chief Cabinet Secretary, and others were present at the meeting. Following the summit meeting, exchanges of notes were signed in the presence of the two leaders and a joint press announcement was conducted.

Prime Minister Abe offered Prime Minister Hun Sen and his delegation a heartfelt welcome to Japan, expressing pleasure at being able to meet again since their meeting in Mongolia the previous year, and noting that this is the eighth summit meeting between the two leaders. He also offered his congratulations on the recent inscription of the Temple Zone of Sambor Prei Kuk as a UNESCO World Heritage Site. Prime Minister Abe also noted that this year marks the 25th anniversary of Japan’s Act on Cooperation with United Nations Peacekeeping Operations and Other Operations (PKO Act), and as Cambodia was the starting point for Japan’s PKO and initiatives to make a “Proactive Contribution to Peace” it is a source of pride that Japan and Cambodia have worked together over the years in global peacebuilding efforts. He expressed the hope that through Prime Minister Hun Sen’s visit Japan-Cambodia relations would continue to develop in various areas.

In response, Prime Minister Hun Sen expressed appreciation for the warm welcome he and his delegation had received, noting that this is his 21st visit to Japan. He expressed confidence that this visit, in the commemorative 25th anniversary year of Japan’s dispatch of PKO units to Cambodia and the 60th anniversary of the visit to Cambodia by former Prime Minister Nobusuke Kishi, would further strengthen the strategic relations shared by Japan and Cambodia.

Prime Minister Abe stated that Prime Minister Hun Sen has consistently supported Japan’s “Proactive Contribution to Peace,” and that since the first deployment of PKO units to Cambodia, peacebuilding has become a major pillar of Japan’s foreign policy. He highly appreciates Cambodia’s participation in PKO missions in recent years and stated that Japan will continue to implement Defense Capacity Building Assistance to Cambodian personnel. Citing the examples of the completion of the Tsubasa Bridge, the start of direct flights linking Japan and Cambodia, and the establishment of the Sunrise Japan Hospital in Phnom Penh, Prime Minister Abe stated that cooperation with Prime Minister Hun Sen is producing results. He praised the smooth implementation of recent local elections and expressed the expectation that Cambodia's next national election will be conducted in a free and fair manner, noting that Japan will continue to provide electoral reform assistance. He also noted that Japan will continue to implement cooperation for Khmer Rouge trials. He stated that Japan would like to cooperate with Cambodia on strengthening the free and open maritime order based on the rule of law in the Indo-Pacific region as global commons.

In response, Prime Minister Hun Sen stated that he would like to provide an introduction to the recent domestic situation in Cambodia, noting that the recent local elections were implemented smoothly and that a national election is scheduled to take place in July 2018. He expressed appreciation to Prime Minister Abe for implementing the electoral reform assistance he had requested on the occasion of Prime Minister Abe's visit to Cambodia in 2013. He also expressed gratitude for Japan’s assistance for demining, for the implementation of Defense Capacity Building Assistance, and for Japan’s contribution to Khmer Rouge trials, noting that Cambodia has consistently supported Japan’s efforts to play a major role in security-related fields, and reiterating support for Japan’s “Proactive Contribution to Peace.” Prime Minister Hun Sen also welcomed and expressed support for Japan’s new initiative; "Free and Open India and Pacific Strategy.”

Referring to Japan’s assistance and investment to contribute to human resources development in line with international standards, Prime Minister Abe stated that Japan will enhance assistance in areas including improvement of logistics, industrial human resource development and reinforcement of urban functions, with a view to assisting Cambodia in becoming a middle-to-high-income country by 2030. He noted that the two projects for which exchanges of notes were to be signed on that day, amounting to 27.4 billion yen, will also contribute to the creation of business opportunities and requested that further efforts be made to improve the investment environment in Cambodia. He also noted that over the past five years exchanges have taken place among approximately 3,500 people and that Japan will continue to maintain a high level of exchange, with a view to further expanding the basis for friendship. He also noted that Japan will establish a Consular Office in Siem Reap next year.

In response, Prime Minister Hun Sen expressed his appreciation for the assistance provided by Japan to date, including in human resources development, noting that he is extremely satisfied that bilateral cooperation has been realized in a variety of fields and that the Kizuna Bridge and Tsubasa Bridge have improved connectivity with Cambodia’s neighboring countries. He also noted that investment by Japanese companies in Cambodia has been increasing in recent years and that he too is seeking to further develop the investment environment. He also expressed appreciation for the continued high level of people-to-people exchanges and for the establishment of the Consular Office of Japan in Siem Reap.

The two leaders also engaged in a candid and significant exchange of opinions on urgent issues in the regional and international arenas, including North Korea and the South China Sea. In particular, with regard to the situation surrounding North Korea, the two leaders confirmed that the international community should work together to place pressure on North Korea and that they would also cooperate in the ASEAN-related meetings this year. Prime Minister Hun Sen expressed his support for efforts towards the early resolution of the abductions issue. On the issue of the South China Sea, the two leaders confirmed the importance of the rule of law, among other matters. Prime Minister Abe also stated that with protectionist moves spreading around the world, Japan will cooperate with Cambodia on the Regional Comprehensive Economic Partnership (RCEP) to ensure the conclusion of a high-quality agreement. Prime Minister Abe also expressed appreciation to Prime Minister Hun Sen for Cambodia’s support in Osaka’s bid to host the 2025 World Exposition.