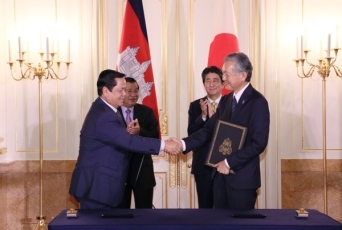 2. Overview of the yen loan project and terms of the loan

(1) The Sihanoukville Port New Container Terminal Development Project (23.502 billion yen)
This project is to develop a new container terminal at Sihanoukville Port, Cambodia’s only large deep water port. This cooperation is expected to strengthen the port’s distribution capability as a result of improving its ability to handle cargo, and thus contribute to industrial development through the promotion of trade and through socioeconomic development in Cambodia.

3. Overview of the grant aid project

(1) The Project for Flood Protection and Drainage Improvement in Phnom Penh Capital City (Phase IV) (3.948 billion yen)
This project is to improve the main drainage channel in Cambodia’s capital city of Phnom Penh and enhance the capability of existing pump stations through sediment collecting equipment. This cooperation is expected to lead to the appropriate discharge of storm water and minimize damage from overflowing levees, and thus contribute to improving the quality of lifestyles in the region concerned.

(Reference) Japan-Cambodia Relations (Basic Data)
The Kingdom of Cambodia covers an area of approximately 181,000 square kilometers (roughly 0.48 times the area of Japan), and has a population of 15.58 million people and a gross national income (GNI) per capita of 1,070 U.S. dollars (World Bank, 2015).