1. Establishment of the "Headquarters for the Abduction Issue" 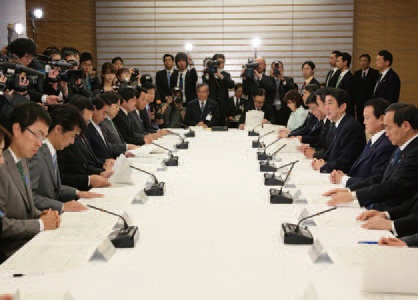 In January 2013, the GoJ established a new "Headquarters for the Abduction Issue" consisting of all Ministers of State, in order to discuss measures to address the abductions issue and to promote strategic approaches and comprehensive measures for the resolution of this issue. The Headquarters is led by the Prime Minister serving as the head and the Minister of State for the Abduction Issue, the Chief Cabinet Secretary, and the Foreign Minister serve as the deputies. Individual Ministers closely collaborate with mainly the head and deputies and exert themselves to the utmost of their ability in their respective fields of responsibility towards the goal of resolving the abductions issue.

Moreover, the "Liaison Council of Government and Ruling and Opposition Parties Institutions for Measures against Abduction Issue" has been formed to strengthen bipartisan efforts towards the resolution of the abductions issue. 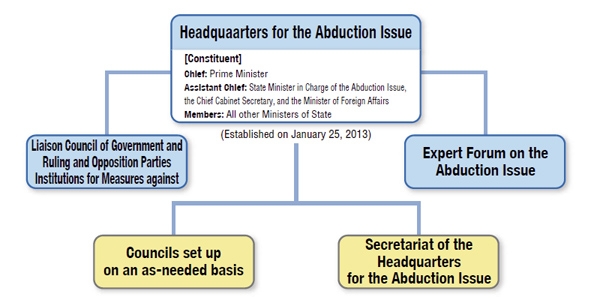 Policies and Concrete Measures for Resolving the Abduction Issue

The abduction of Japanese citizens by North Korea is a grave concern which affects the national sovereignty of Japan and the lives and safety of the Japanese people, and urgently needs to be resolved by the government. The government will firmly maintain its basic policy that the normalization of diplomatic relations with North Korea will not occur until the abduction issue is resolved, and will endeavor to have their safety secured and bring them back to Japan immediately, irrespective of whether they are officially identified as abductees. The government is committed to continuing its investigation of the truth and demanding the handover of those responsible for the abductions.

With the initiative of the chief and the assistant chiefs of the Headquarters, all Cabinet ministers should cooperate in implementing the above-mentioned policy, and should make their utmost efforts in the following eight points within their respective areas of responsibility. 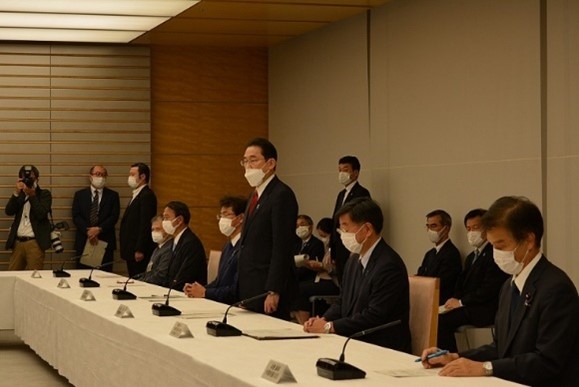 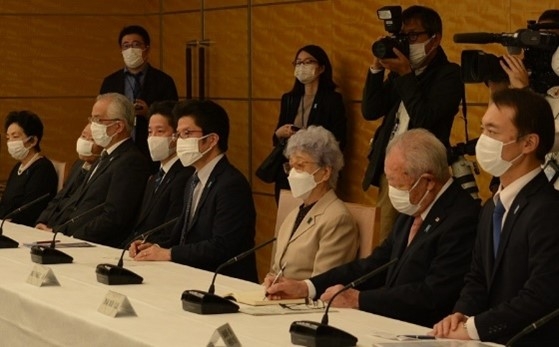 Meeting between Mr. Kishida, Prime Minister of Japan, and Family Members of the Abductees(October 2021)

2. Investigations by the GoJ

The National Police Agency of Japan determined that a case in which an elder sister and younger brother of Korean nationality were abducted from Japan (two abductees) is also a suspected abduction case committed by North Korea. It has issued domestic arrest warrants for 11 suspects including North Korean agents, who were involved in abduction cases, and then also issued for them international arrest warrants. 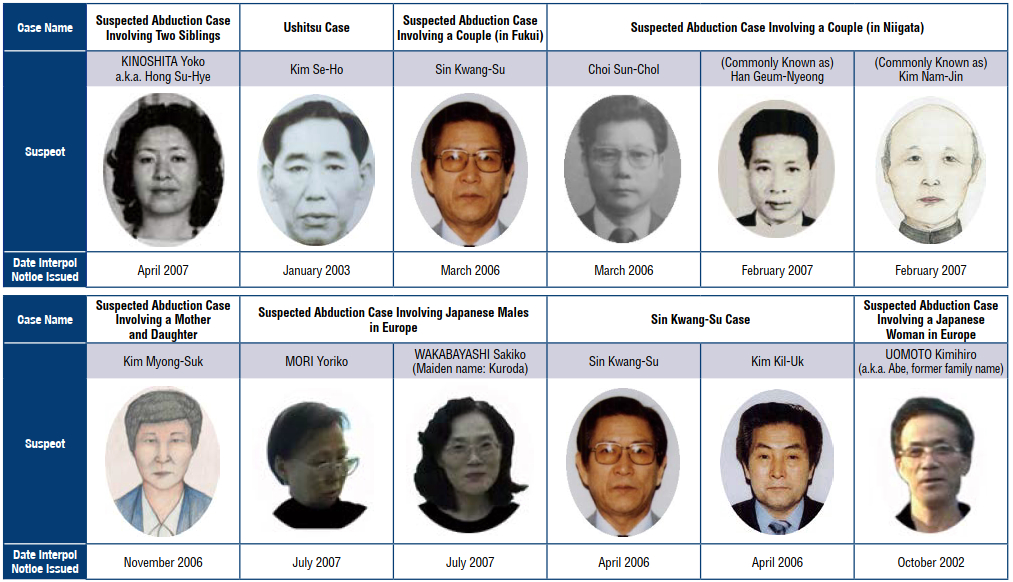 3. Major Activities to Publicize and Promote the Understanding of the Abductions Issue

The Law Concerning Measures to Address the Abductions Issue and Other North Korean Human Rights Violations was promulgated and came into effect in June 2006 with the purpose of increasing awareness among Japanese nationals of the abductions issue and other human rights violations committed by North Korean authorities. In cooperation with the international community, the law also aims to elicit a full account of the situation surrounding the abductions issue and to prevent abductions from happening again in the future. In addition to laying out the responsibilities of the GoJ in resolving the abductions issue, this law holds national and local governments responsible for raising awareness of the issue and to this end establishes North Korean Human Rights Abuses Awareness Week (December 10 - 16), which calls on national and local governments to hold educational events on the topic during this week. The GoJ also distributes pamphlets and posters, screens movies and cartoons which raise awareness about the abductions issue, dispatches personnel for workshops and other educational events, hosts essay contests for junior high and high school students, holds training for teachers, university students aspiring to become teachers and others, broadcasts radio programs (in Japanese and Korean) to North Korea and holds arts performances aimed at raising awareness of the issue, etc. In particular, during North Korean Human Rights Abuses Awareness Week, many conferences and symposia, etc. are held by governments and NGOs to advocate the resolution of the abductions issue both inside and outside of Japan. 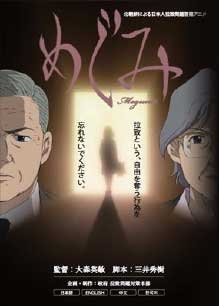 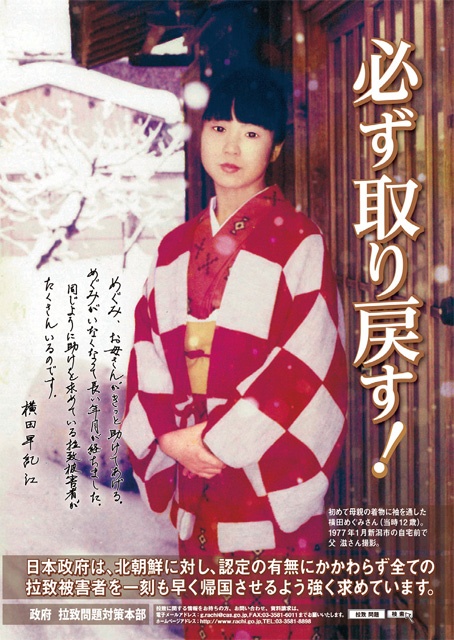 In October 2020, with the determination not to stall the efforts of the international community to resolve the abductions issue by North Korea, even while COVID-19 is raging globally, the GoJ released the video messages, “Voices of the International Community Calling for the Resolution of the Abduction Issue,” with the support of international partners, families of victims all over the world, and an expert on the issue. 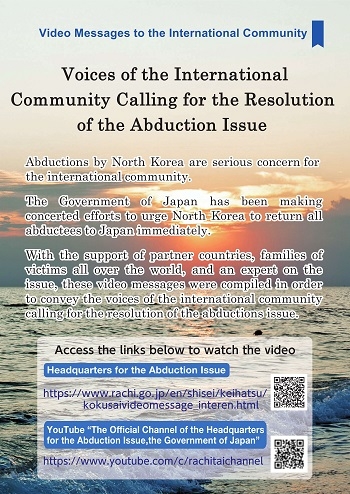 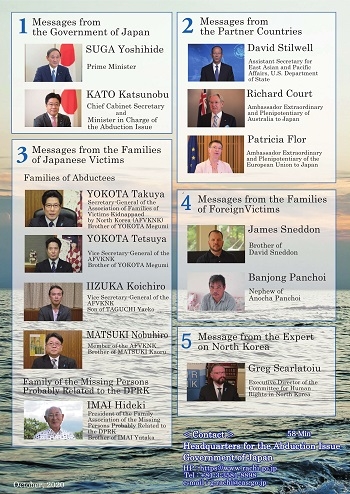 On July 5, 2006, North Korea launched seven ballistic missiles. Since then, despite repeated warnings from the international community, Pyongyang again launched ballistic missiles in April 2009, April 2012 and December 2012. It also carried out nuclear tests in October 2006, May 2009 and February 2013. In addition, in March 2010, North Korea launched a torpedo attack on an ROK naval vessel. In response, the GoJ protested firmly, expressing strong condemnation of these North Korean actions, and imposed a series of measures against North Korea. In addition to the sanction measures set out in the UNSC resolutions, Japan requested its own citizens to refrain from traveling to North Korea, banned the entry of North Korean nationals into Japan as well as of North Korean flagged ships and ships that have made port calls in North Korea into Japanese ports and also, prohibited export and import with North Korea.

Based on what was agreed in May 2014, that July Japan lifted restrictions on visits of persons, special measures of restriction on North Korea regarding the amount of money requiring notification of the export of means of payments and report on the money transfer, and the embargo on the entry of North Korea flagged ships with humanitarian purpose into Japanese ports.

However, in response to North Korea’s January 2016 nuclear test and February ballistic missile launch, in February that same year, Japan implemented restrictions on visits of persons; lowered the minimum amount of money requiring notification of the export of means of payment; prohibited in principle the payment of money to North Korea; prohibited the entry of North Korean flagged ships as well as ships carrying the flag of a third country which stopped at a port in North Korea, including those with humanitarian purposes, into Japanese ports; and also expanded the list of related organizations and individuals subject to asset freezing. In addition, Japan also implemented measures against North Korea based on UNSC resolution 2270 adopted in March of that year, including prohibiting the entry into Japanese ports of ships designated as subject to sanction and expanding the list of related organizations and individuals subject to asset freeze.

Moreover, in 2017, North Korea launched 17 ballistic missiles, including three with an intercontinental ballistic missile (ICBM) range, and in September of the same year, North Korea carried out the sixth nuclear test, the scale of which is estimated to be the largest in its history. Meanwhile, UNSC adopted resolutions 2356, 2371, 2375 and 2397 in June, August, September and December of the same year respectively, and Japan expanded the list of related organizations and individuals subject to asset freeze based on those resolutions. In addition, Japan implemented autonomous measures in July, August, November and December of the same year, designating additional entities and individuals subject to asset freeze.