Talks between Japan and North Korea on the Abductions Issue 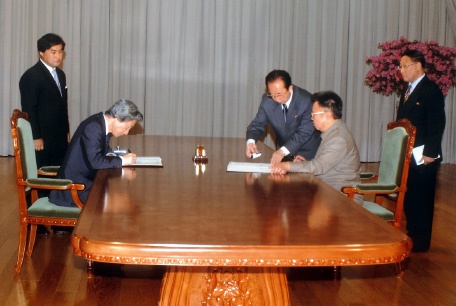 At the first Japan-North Korea summit meeting held on September 17, 2002, Kim Jong-Il, then Chairman of the National Defense Commission of North Korea, finally admitted, after years of denial, that the abductions of Japanese citizens took place and apologized. He also stated that among 13 abductees, four were alive, eight were dead and for one, entrance into North Korea could not be confirmed (Note). In addition, he acknowledged the abduction of SOGA Hitomi, who wasn’t on the list for the investigation requested by the GoJ and confirmed that she was alive (On the other hand, he claimed that as a result of a subsequent investigation, SOGA Miyoshi, SOGA Hitomi’s mother who had disappeared at the same time, had not entered North Korea.). Moreover, while promising to punish those responsible and to prevent any recurrence, Kim assured Japan that he would facilitate meetings between the abductees and their families as well as the return of abductees to Japan.

In response, then Prime Minister KOIZUMI Junichiro strongly protested to Kim Jong-Il, then Chairman of the National Defense Commission, and demanded the continuation of an investigation, the return of those alive, and the prevention of any recurrence.

2. Dispatch of the Investigation Team of the GoJ (September and October 2002)

From September 28 to October 1, 2002, the GoJ dispatched an investigation team that met with victims and strived to collect information on abductees who have not yet been accounted for. Unfortunately, the information provided by North Korea was limited right from the start and inconsistent and dubious on many points. For example, North Korea handed over materials it claimed were the remains of MATSUKI Kaoru, but forensic analyses showed that these remains were those of someone else. At the 12th round of the negotiations to normalize diplomatic relations between Japan and North Korea held from October 29 to 30, 2002 in Kuala Lumpur, Malaysia, the GoJ posed 150 questions concerning inconsistencies in the information provided by North Korea and requested more information, but did not receive an adequate response from North Korea. 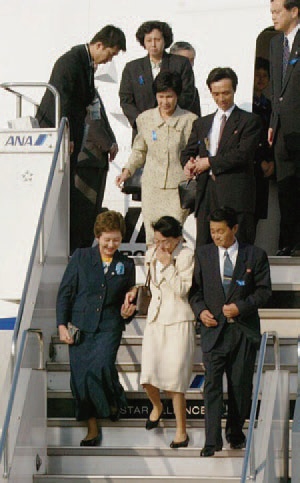 The abduction victims returned to Japan after 24 years.

On October 15, 2002, five abductees (CHIMURA Yasushi and Fukie, HASUIKE Kaoru and Yukiko, and SOGA Hitomi) returned to Japan and were finally reunited with their families.

With the consideration that the five abductees returned to Japan should be provided with an environment in which they were free to determine their own future and the future of their families who were still in North Korea, on October 24, 2002, the GoJ announced that the five abductees will remain in Japan. The Government also strongly urged North Korea to ensure the safety of their family members still in North Korea and to promptly set a date for their return to Japan. 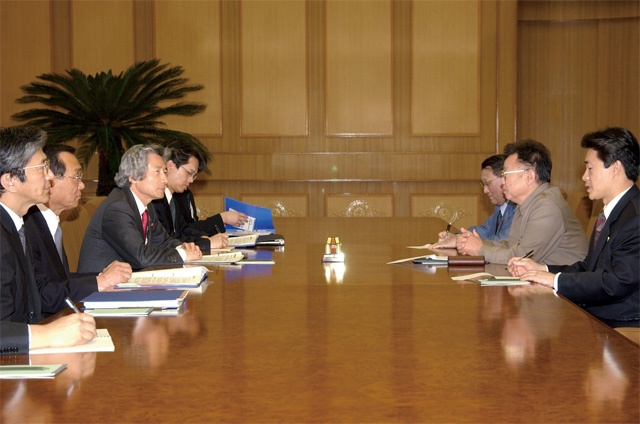 On May 22, 2004, then Prime Minister KOIZUMI visited North Korea for the second time and engaged in discussions with Kim Jong-Il, then Chairman of the National Defense Commission, concerning the abductions and other bilateral issues, as well as security issues such as North Korea’s nuclear and missile programs.

Regarding the abductions issue, the two leaders agreed to the following points during their meeting:

Based on this agreement, all five members of the families of CHIMURA Yasushi and Fukie and of HASUIKE Kaoru and Yukiko returned to Japan with then Prime Minister KOIZUMI. Three family members of SOGA Hitomi subsequently arrived in Japan on July 18, 2004.

Note: The “two not confirmed to have entered North Korea” refers to KUME Yutaka and SOGA Miyoshi .

The consultation on the abductions issue at the Japan-North Korea Comprehensive Talks held in February 2006 extended for a total of approximately 11 hours, and Japan once again resolutely demanded the return to Japan of the surviving abductees, the launch of a new investigation aimed at revealing the truth about what had happened, and extraditing those responsible for the abductions. In response, North Korea repeated the same explanation it had previously given that “all of the abductees who are still alive have already returned to Japan.” Regarding the search for the truth, Pyongyang did not vow to continue investigations into the abductees whose whereabouts are unknown and refused to extradite those responsible.

The first meeting of the Working Group on the Normalization of Japan-North Korea Relations, which was established at the Six-Party Talks in February 2007, was held in March of the same year. The GoJ reiterated its demands for the securing of the safety of all abductees and their families and their swift return, a full account of the truth in all abduction cases, and the extradition of those responsible. North Korea, however, failed to show good faith towards the resolution of the abductions issue by again repeating its position that “the abductions issue has already been resolved.” Neither was there substantial progress achieved on the abductions issue at the second meeting of the Working Group held in September.

In November 2012, the Japan-North Korea Intergovernmental Consultations, which were the first consultations with North Korea in four years, were held. At the meeting, the two parties held in-depth discussions on the abductions issue and came to an agreement to continue deliberations in the future for further review in consideration of past progress and for discussion on individual points of view. In addition, the Japanese side brought up for discussion to North Korea the cases where the possibility of abduction by North Korea cannot be dismissed.

The second Consultations were scheduled for December 5 and 6, but Japan had no choice but to postpone the meeting due to North Korea announced a missile launch on December 1.

Subsequently, official talks between Japan and North Korea were held in Beijing, China, on March 30 and 31. Wide-ranging exchanges of views concerning issues of interest of either side took place in a sincere and candid manner, and it was concurred to continue the consultations. In regard to the abductions issue, Japan raised it’s basic view based on the discussions in the consultations until then. 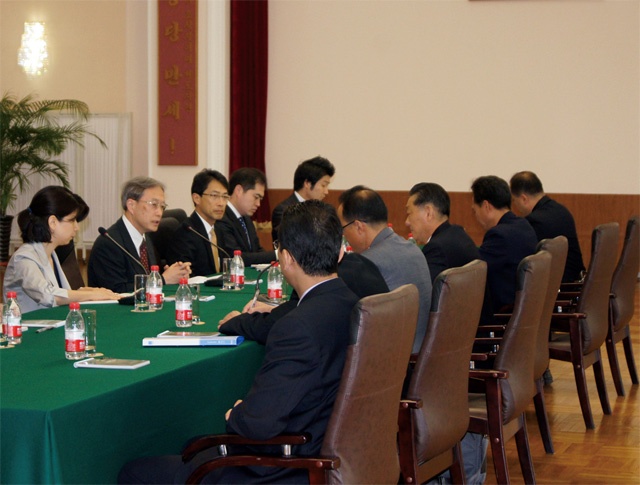 On July 1, 2014, Japan-North Korea Intergovernmental Consultations were held in Beijing, China. North Korea explained the organization, structure, and key members of the Special Investigation Committee. Japan asked questions focused on whether the committee is authorized to investigate all relevant organizations.

On July 4, North Korea, through its “state” media, announced the beginning of the investigations on all Japanese nationals including the abductees. It publicly announced in North Korea and abroad, the authority, structure, and investigation methods of the Special Investigation Committee that were consistent with the understanding of the Japanese side. At the same time, Japan lifted restrictions on visits of persons, special measures of restriction on North Korea regarding the amount of money requiring notification of the export of means of payments and report on the money transfer, and the embargo on the entry of North Korea flagged ships with humanitarian purpose into Japanese ports.

On September 29, 2014, a meeting between Japan-North Korea diplomatic authorities was held in Shenyang, China, for North Korea’s explanation on the current status of the investigations. North Korea said that it was not able to provide specific results on individual cases at this stage, but explained that, if a Japanese delegation visits Pyongyang and meet with the members of the Special Investigation Committee, they could hear a clearer explanation of the current status of the investigations.

In October 2014, Consultations with the Special Investigation Committee were held in Pyongyang, North Korea. Japan reiterated that the resolution of the abductions issue is the most important for Japan, ensuring security of all abductees and their immediate return to Japan, providing full account of the truth in all abduction cases and the extradition of perpetrators who conducted the abductions are indispensable, and Japan seeks to find out the whereabouts of abductees, whether or not officially identified as such by the Government, and to have them back safely to Japan as soon as possible. Japan also strongly urged North Korea to expeditiously conduct its investigations and report the results sincerely and swiftly to Japan.

North Korea provided an explanation of the organization such as the structure of the committee and its branches. It also explained its policy to conduct objective and scientific investigations with a focus on witnesses and physical evidence and to thoroughly deepen the investigations from new angles, regardless of the past investigation results. It also explained that the Committee is invested with special authority by the National Defense Commission, the highest guiding body of North Korea, to conduct a thorough investigation of all organizations, including special agencies. Regarding the abductions issue, North Korea said that it was investigating the specific cases, including whether or not abductees entered North Korea, their living circumstances and the details of how each case took place, and that a new investigation into related places including guest houses where the abductees had stayed was being carried out while looking for new physical evidence and witnesses.

15. Unilateral Announcement by North Korea of Dissolution of the Special Investigation Committee (February 2016)

In response to North Korea’s January 2016 nuclear test and the launching of a ballistic missile purported to be a “satellite” in February, that same month Japan announced it would implement autonomous measures against North Korea. In turn, North Korea unilaterally announced that it would completely cease comprehensive investigations concerning any and all Japanese persons, including abductees, and dissolve the Special Investigation Committee. Japan firmly protested these actions by North Korea and conveyed its position that it would not abandon the Stockholm Agreement. Japan also demanded that North Korea return abductees as soon as possible based on the Agreement.

Recently, Japan has repeatedly conveyed its basic position to North Korea. For example, at the reception of the opening ceremony of the Pyeongchang Olympic Winter Games hosted by President Moon Jae-In of the ROK in February 2018, then Prime Minister ABE brought up the abductions, nuclear and missile issues and conveyed Japan’s basic position to Kim Yong-Nam, then People’s Assembly of North Korea. In particular, then Prime Minister ABE strongly urged North Korea to resolve the abductions issue, including the return of all abductees to Japan. In addition, based on the request from then Prime Minister ABE, President Trump of the United States raised the abductions issue directly with Kim Jong-Un, Chairman of the State Affairs Commission, at the U.S.-North Korea summit meetings held in June 2018 and February 2019 (details to follow).