During the 1970’s and 1980’s, many Japanese citizens disappeared under unusual circumstances. Subsequent investigations by the Japanese authorities and testimonies by former North Korean agents who had defected revealed that there was a strong possibility that these cases involved abductions conducted by North Korea. Therefore, since 1991, the GoJ has brought up the abductions issue at every available opportunity. North Korea had stubbornly kept denying any involvement. However, at the First Japan-North Korea summit meeting held in September 2002, North Korea at last admitted for the first time that it had abducted Japanese citizens and apologized while promising to prevent any further recurrence. In October of the same year, five of the abductees returned from North Korea to Japan after 24 years.

However, as for those others whose whereabouts are currently unknown, despite North Korea’s explicit commitment at the Second Japan-North Korea summit meeting in May 2004 to immediately resume thorough investigations to obtain a full account of what had happened to all abductees, Pyongyang has yet to provide any convincing explanations. The remaining abductees are still denied all freedoms, having been long detained in North Korea, and to this day await rescue from North Korea. 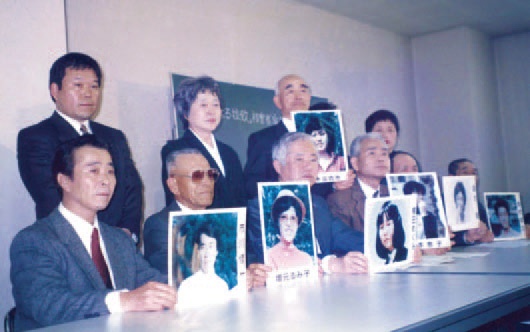 In Japan, there have been active campaigns to rescue abductees, including the Association of the Families of Victims Kidnapped by North Korea formed in 1997, and the submission of petitions signed by more than 14 million people (as of October 2020) to the Prime Minister of Japan.

The abductions by North Korea are a critical issue concerning the sovereignty of Japan and the lives and safety of Japanese citizens. It is a highly pressing issue that must be resolved under the responsibility of the national GoJ. The GoJ has so far identified 17 Japanese citizens, including the five that have already returned to Japan, as victims of abduction by North Korea. In addition, there are other cases where the possibility of abduction by North Korea cannot be dismissed, such as the suspected abductions of non-Japanese nationals referred to as “Korean domiciles” (an alternative nationality for ethnic Koreans in Japan who do not hold Republic of Korea (ROK) citizenship) in Japan and cases of so-called “unidentified missing Japanese probably related to North Korea” (Note). While North Korea has not provided any satisfactory account or any convincing evidence, the GoJ remains fully committed to demanding that North Korea take action to assure the safety of abductees and immediately return them to Japan irrespective of whether they are officially identified, based on the premise that all abductees whose whereabouts are unknown are still alive. In addition, the GoJ shall tirelessly pursue the disclosure of the truth regarding all abduction cases and also demand the handover to Japan of the perpetrators of the abductions. The GoJ will, in accordance with the Japan-DPRK (the Democratic People’s Republic of Korea) Pyongyang Declaration, continue to make its utmost effort to realize the return of all the abductees as quickly as possible while settling the unfortunate past to normalize relations with North Korea.