On August 23, Mr. MOTEGI Toshimitsu, Minister for Foreign Affairs of Japan, held meetings with government dignitaries of the Lao People’s Democratic Republic (Lao PDR). The overview of the meetings is as follows. 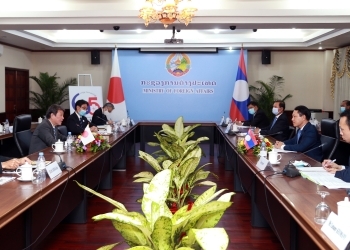 (1) Minister Motegi noted that this year was a milestone year marking the 65th anniversary of the establishment of diplomatic relations between Japan and the Lao PDR and the fifth anniversary of their strategic partnership, and expressed his intention to develop an even closer strategic partnership between the two countries in a range of areas.
In response, Minister Saleumxay stated that it is his pleasure to welcome Japanese foreign minister amid the COVID-19 pandemic. Minister Saleumxay also stated that the spread of the COVID-19 is contained in the Lao PDR partly because of Japan’s assistance, and that he appreciates Japan’s assistance to the Lao PDR while Japanese people are making their best efforts for the infection prevention.

(2) The two Ministers concurred on commencing the “Residence Track” as early as early September, which will enable long term residents to travel between the two countries while maintaining the requirement of fourteen-day quarantine at home or another designated area after their entry in Japan. In addition, the two Ministers concurred on accelerating coordination through diplomatic channels toward the early commencement of the “Business Track,” which will enable business travelers to conduct business activities in limited areas during the fourteen days quarantine. Minister Motegi stated that Japan would accept the entry to Japan by Japanese Government scholarship students from the Lao PDR at the earliest timing. In response, Minister Saleumxay expressed his appreciation.

(3) Regarding the Lao PDR’s next National Socio-Economic Development Plan that will initiate next year, Minister Motegi stated that Japan intends to further contribute to creating an effective plan, including in the areas of financial stabilization, quality growth, and measures against infectious diseases and natural disasters. In addition, Minister Motegi stated that Japan will continue to support the strengthening of connectivity, including the East-West Economic Corridor.
In response, Minister Saleumxay expressed his gratitude on behalf of the Government and the people of the Lao PDR for Japan’s assistance over many years, praised the quality investments made by Japanese companies in the country and expressed his for further expansion of Japanese companies’ activities in the Lao PDR.

(4) Following the meeting, in the presence of the two Ministers, the signing ceremony was held for the Exchange of Notes regarding two Grant Aid Projects related to improvement of facilities and equipment at teacher training schools and their affiliated schools in eight locations in the Lao PDR and to the provision of new public buses that will serve the city of Vientiane and elsewhere. The hand-over ceremony was also held for medical equipment that will contribute to the COVID-19 response in the Lao PDR. 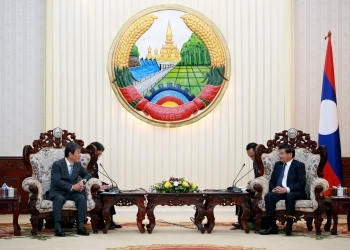 (2) Minister Motegi elaborated on the talks toward resuming visits to each other’s country by their people, which was discussed at the Foreign Ministers’ Meeting preceding the courtesy call, and Prime Minister Thongloun expressed his support.

(3) Minister Motegi and Prime Minister Thongloun exchanged views on further strengthening the bilateral strategic partnership and the regional situation including the South China Sea issue and the situation of North Korea, as well as cooperation in the international arenas. Minister Motegi also sought understanding and cooperation toward the early resolution of the abductions issue and obtained Prime Minister Thongloun’s support. 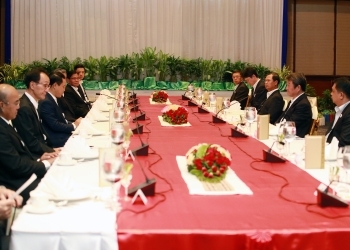 On August 23, commencing at 6:30 p.m. for approximately two hours, Mr. MOTEGI Toshimitsu, Minister for Foreign Affairs of Japan, participated in a working dinner hosted by H.E. Mr. Saleumxay Kommasith, Minister of Foreign Affairs of the Lao People’s Democratic Republic (Lao PDR). The overview of the meeting is as follows.

(1) Minister Motegi expressed his appreciation for the warm hospitality given to his visit by the Lao PDR and noted that he was able to have valuable exchange of opinions during the courtesy call on Prime Minister Thongloun after the Japan-Laos foreign ministers’ meeting. Minister Saleumxay stated that it is great honor to welcome Minister Motegi as the first foreign dignitary amid the expansion of the novel coronavirus disease (COVID-19). Minister Saleumxay also stated that taking the opportunity of this visit he would like to further develop the good bilateral relationship.

(2) The two Ministers exchanged views regarding the regional situation including the South China Sea issue and the situation of North Korea and shared the view on deepening bilateral cooperation. Minister Motegi also sought understanding and cooperation toward the early resolution of the abductions issue and obtained Minister Saleumxay’s support.