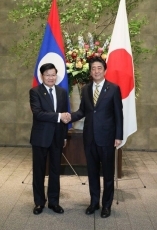 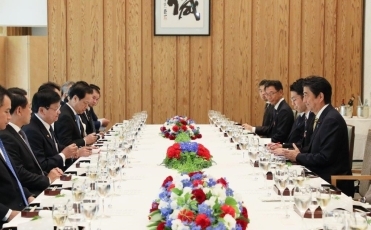 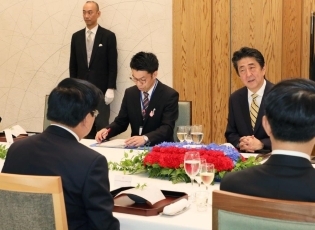 On May 30, commencing at 11:50 a.m. for approximately 55 minutes, Mr. Shinzo Abe, Prime Minister of Japan, held a working lunch at the Prime Minister’s Office with H.E. Dr. Thongloun Sisoulith, Prime Minister of the Lao People’s Democratic Republic (Lao PDR), who was visiting Japan to attend international meetings and other events. The overview of the working lunch is as follows. The working lunch was attended by Mr. Yasutoshi Nishimura, Deputy Chief Cabinet Secretary; Mr. Kotaro Nogami, Deputy Chief Cabinet Secretary; and others. Prior to the working lunch, the leaders attended the signing of the Exchange of Notes on the grant aid project, “The Project for Human Resource Development Scholarship,” and on the “Amendment to the schedule to the Agreement Between Japan and the Lao People’s Democratic Republic for Air Services.”

(1) Prime Minister Abe welcomed Prime Minister Thongloun’s visit to Japan for the fourth consecutive year, stated that this year is the "Mekong-Japan Exchange Year 2019" and that he was aware the Laos Festival was held with great success in Yoyogi Park last weekend. He also expressed his hopes for further expanding the bilateral relationship and developing the entire Mekong region.

(2) In response, Prime Minister Thongloun stated that he was honored to meet Prime Minister Abe again, appreciated the support from the Government of Japan, including the project which was just signed, and congratulated the accession to the Throne by His Majesty the Emperor.

2. Economic cooperation and other bilateral relations

(1) Prime Minister Abe stated that the Government of Japan has decided to extend cooperation for the reconstruction of Attapeu province, which recently suffered from floods due to a dam collapse, as well as for financial stabilization in the Lao PDR. Prime Minister Abe stated that an opening ceremony is scheduled to be held next month for the project to reconstruct the bridges on National Road No. 9 located on the East-West Economic Corridor, and that this project will help maintain and strengthen a “Free and Open Indo-Pacific” and enhance the connectivity of the region as a materialization of the “Tokyo Strategy 2018”.

(2) In response, Prime Minister Thongloun stated that the situation of the affected areas in Attapeu province is improving thanks to supports from many countries and organizations including Japan, that he hoped for the continued support of the Government of Japan through dispatch of experts and other means towards achieving financial stabilization in the Lao PDR, that human resources development supports from Japan are extremely meaningful, and that he hopes to deepen bilateral cultural exchanges through projects of the Japan Foundation.

(3) Prime Minister Abe noted that, estimating the increase of Lao business persons who will visit Japan, the Government of Japan has decided to extend the validity of multiple entry visas for business purpose provided to Lao people from three to five years, and expressed his continued hope that the Government of the Lao PDR will improve its investment environment.

The two sides held a candid and meaningful exchange of views concerning urgent issues in the regional and international arena, including North Korea and the South China Sea, and shared the view that they will work together further. In particular, with regard to the situation in North Korea, the two leaders shared the position that the full implementation of the relevant United Nations Security Council resolutions is necessary for the denuclearization of the Korean Peninsula, and Prime Minister Thongloun once again expressed his understanding and cooperation for the early resolution of the abductions issue.