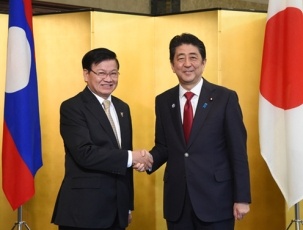 Photo: Cabinet Public Relations Office
On May 28, commencing at 1:00 p.m. for approximately 30 minutes, Mr. Shinzo Abe, Prime Minister of Japan, held a Japan- Lao People's Democratic Republic (Lao PDR) Summit Meeting, which continued on to a working lunch at approximately 2:30 p.m. with H.E. Dr. Thongloun Sisoulith, Prime Minister of the Lao PDR , who is on a working visit to Japan. The overview of the meeting is as follows.

Next, Prime Minister Thongloun stated that he hopes the Strategic Partnership with Japan will be deepened, and conveyed his profound appreciation for the Official Development Assistance (ODA) that the Government of Japan has provided Lao PDR thus far. Prime Minister Thongloun also mentioned that Lao PDR will agree to the formulation of the ''Japan-Laos Joint Development Cooperation Plan,'' and expressed his gratitude regarding the fact that Japan is carrying out the Japan-Mekong Connectivity Initiative and has announced the ''Initiative for Expanding the Export of High-Quality Infrastructure'' amounting to approximately 200 billion dollars. Prime Minister Thongloun then pointed out that Japan, as the largest donor of ODA for many years, has assisted with development in Lao PDR, and asked for the continuation of such assistance. Prime Minister Thongloun added that he is happy about the recent entry into force of the Air Services Agreement, and welcomes the attendance of Prime Minister Abe to the ASEAN-related summit meeting this September.

In response, Prime Minister Abe stated that as demonstrated by the agreement to establish a ''Strategic Partnership'' between Japan and Lao PDR last year, Japan is focusing very closely on Lao PDR, which is located at the center of the Mekong Region, and strengthening regional connectivity will be key for development. Prime Minister Abe added that Japan has announced the ''Initiative for Expanding the Export of High-Quality Infrastructure'' amounting to a total of approximately 200 billion dollars, and intends to cooperate with Lao PDR in this regard.

Furthermore, Prime Minister Abe commented that Japan will support the development of institutions and human resources based on the Japan-Mekong Connectivity Initiative, and this month, Japan will begin supporting the Project for the Construction of Bridges in the East-West Economic Corridor. In addition, Prime Minister Abe stated that Japan has recently decided to assist with study abroad programs for young government officials of Lao PDR, and he is looking forward to the establishment of direct flights based on the entry into force of the Air Services Agreement.

3. Cooperation in the region and international arena

Prime Minister Thongloun responded by stating that he appreciates Japan's support for Lao PDR as the presidency holder, and pointed out that the ASEAN Community was established just last year. He added that the unity of ASEAN is important, and in light of this, Lao PDR will closely exchange opinions with all of the countries concerned, and work hard for the building of agreements that are acceptable to all of the relevant countries.

Lastly, Prime Minister Abe commented that he expects that the Laos Festival, which will be held in Yoyogi Park, Tokyo starting on May 28, will provide an opportunity to deepen understanding regarding Lao PDR, and is looking forward to meeting with Prime Minister Thongloun once again in Lao PDR in September.