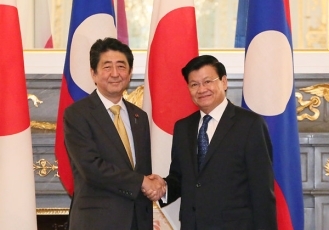 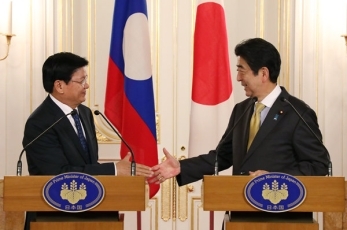 On June 7, commencing at shortly after 6:10 p.m. for approximately 50 minutes, Mr. Shinzo Abe, Prime Minister of Japan, held a meeting with H.E. Dr. Thongloun Sisoulith, Prime Minister of the Lao People’s Democratic Republic (Lao PDR), who was officially visiting Japan, at the Akasaka State Guest House. The overview of the meeting is as follows. Mr. Kotaro Nogami, Deputy Chief Cabinet Secretary, and others were present at the meeting. Following the meeting, the two leaders conducted a joint press announcement.

In response, Prime Minister Thongloun expressed the view that the relationship between Japan and the Lao PDR is deepening, stated that he feels honored to meet Prime Minister Abe again, and explained that he is also happy to hold holding this third summit meeting. Prime Minister Thongloun stated that since Japan and the Lao PDR elevated their relationship to a “Strategic Partnership”, he is happy it has become possible to hold these summit meetings and explained that he was inspired by Prime Minister Abe’s speech at the dinner reception for the International Conference on the Future of Asia two days ago.

(1) Politics and the economy

Prime Minister Thongloun responded by thanking Prime Minister Abe for dispatching an expert to support fiscal stabilization, and explained that on the day before this summit meeting he participated in a seminar with the representatives of a large number of Japanese companies interested in investing in the Lao PDR, and the Government of the Lao PDR intends to move ahead with improving the investment environment. Furthermore, Prime Minister Thongloun stated that he also hopes to increase the exchange of people and goods by establishing direct flights between the Lao PDR and Japan promptly.

Prime Minister Abe noted that he is promoting implementation of the Japan-Lao PDR Joint Development Cooperation Plan, which was adopted in September last year, and Japan is contributing to realizing the “vibrant connectivity” of the Mekong region, beginning with the East-West Economic Corridor (EWEC). Prime Minister Abe explained that a project to expand the terminal building at Wattay International Airport is also progressing favorably, and with regard to a plan for a highway between Vientiane and Hanoi, he stated that Japan intends to cooperate on formulating the optimum plan for realizing that goal. Additionally, Prime Minister Abe noted that Japan has recently decided on cooperation in order to assist young administrative officials from the Lao PDR with studying abroad, and on new support for strengthening the Lao PDR’s waterworks administration capacity, and he also referred to the “Innovative Asia” program for contributing to the development of highly-skilled human resources in the Lao PDR which is begun from this year. Prime Minister Abe thanked Prime Minister Thongloun for his cooperation with the activities of the Japan Overseas Cooperation Volunteers dispatched to the Lao PDR.

The two sides also held a frank and meaningful exchange of views concerning pressing challenges in the regional and international arenas, including North Korea and the South China Sea, and confirmed that they will coordinate their efforts at this year’s ASEAN-related meetings also. Prime Minister Abe mentioned cooperating under the “Free and Open Indo-Pacific strategy,” and also commented on cooperating to entrench fundamental values such as freedom of navigation and the rule of law, and concepts such as openness of infrastructure. The two leaders shared concerns regarding the North Korea situation, and Prime Minister Abe stated that North Korea constitutes a new level of threat and it will be important to increase pressure. Prime Minister Thongloun commented that fulfilling the relevant United Nations Security Council (UNSC) resolutions is important. Furthermore, the two leaders confirmed they will cooperate on promptly resolving the abductions issue. Additionally, the two leaders shared the view that they will cooperate on promptly concluding a high-quality Regional Comprehensive Economic Partnership (RCEP).