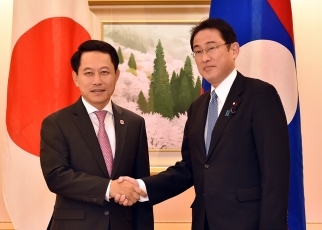 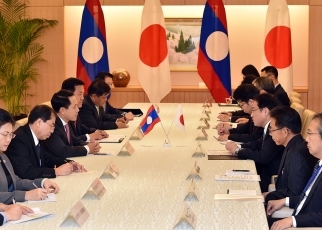 On June 7, commencing at 2:05 p.m. for approximately 40 minutes, Mr. Fumio Kishida, Minister for Foreign Affairs, held a Japan-Laos Foreign Ministers’ Meeting with H.E. Mr. Saleumxay Kommasith, Minister of Foreign Affairs of the Lao People’s Democratic Republic (Lao PDR), who is visiting Japan. The overview of the meeting is as follows.

2. Bilateral relations
Minister Kishida explained that as a “strategic partner”, Japan is supporting the Lao PDR to graduate from Least Developed Countries (LDC) by 2020, and intended to continue to cooperate to embody the Japan-Lao PDR Joint Development Cooperation Plan. Minister Kishida mentioned that Japan will invite the Lao people who are involved in the removal of unexploded ordnance next month and provide training. Minister Kishida also explained that Japan has recently decided to support young administrative officials from the Lao PDR studying abroad, and also stated that the “Innovative Asia” program, which contribute to the development of highly-skilled human resources in the Lao PDR will begin from this year. Minister Kishida expressed the view that Japanese companies establishing businesses in the Lao PDR are significantly contributing to the country’s development, and requested the Lao PDR continue cooperating in improving the environment of investment environment in order to encourage further investment.

In response, Minister Saleumxay noted that Japan is the largest donor of Official Development Assistance (ODA) to the Lao PDR, and highly appreciated the support from the Government and Japanese people for the Lao PDR to realize its goal of graduating from Least Developed Countries (LDC) status by 2020, expressing gratitude for a steady growth of the investment on behalf of the Lao government and its people. Minister Saleumxay welcomed Japanese companies, and their strong interest in the Lao PDR. Minister Saleumxay also stated that the Government of the Lao PDR will cooperate to improve the investment environment. Furthermore, Minister Saleumxay was grateful for Japan’s cooperation with the removal of unexploded ordnance and cooperation as well as the development of highly-skilled human resources.He also expressed his gratitude for the activities of the Japan Overseas Cooperation Volunteers in the Lao PDR.

3. Cooperation in the regional and international arenas
In addition, the two ministers exchanged views on challenges in the regional and international arenas, including the issue of South China Sea and the North Korea. Both ministers shared concerns about the situation in North Korea, and Minister Kishida stated that the international community should unite to increase pressure on North Korea, which constitutes a new level of threat. The two sides shared the view that fulfilling the relevant United Nations Security Council (UNSC) resolutions (PDF)

is important. In addition, they confirmed that they will collaborate to promptly resolve the abductions issue.