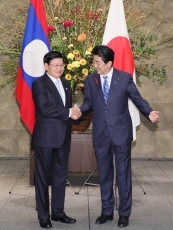 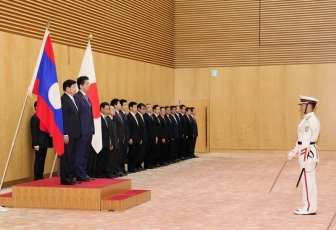 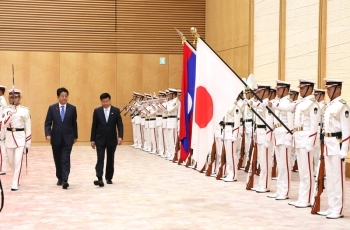 (1) Prime Minister Abe welcomed Prime Minister Thongloun’s second visit to Japan this year, extended his sympathies over the flooding that accompanied the dam collapse that occurred in the Lao PDR in late July, and stated that the Government of Japan implemented emergency assistance, and in addition, Japanese non-governmental organizations (NGOs) supported by the Japanese Government are undertaking operations on-site now, and Japan intends to cooperate towards the restoration of the disaster-affected area.

2. Economic cooperation and other bilateral relations

(1) Prime Minister Abe noted that the two countries recently decided to cooperate in the field of unexploded ordnance removal, and explained that next month Japan’s Ministry of Defense is scheduled to implement a Capacity Building Assistance project in the Lao PDR, in the field of humanitarian aid and disaster relief. Prime Minister Abe also explained that this year is a milestone year that marks the 20th anniversary of cooperation between Japan and the Lao PDR on the development of the legal and judicial system, and stated that Japan intends to continue with nation-building and human resources development in the field of the legal and judicial system. Prime Minister Abe stated that these are good examples of cooperation from the viewpoint of aiming to realize a “Free and Open Indo-Pacific

,” and explained that Japan intends to coordinate and cooperate, as a partner that is pursuing peace, stability and prosperity in the Mekong region.

(3) Prime Minister Abe mentioned that on the previous day Mr. Pia Laophakdee won a gold medal in weightlifting in the 49-kilogram Men’s Division at the Asian Para Games 2018 currently taking place in Indonesia, and Prime Minister Thongloun replied that this was a historical achievement.

The two sides held a frank and meaningful exchange of views concerning challenges in the regional and international arenas, including North Korea and the South China Sea, and shared the view that they will work together further. In particular, with regard to the North Korea situation, the two leaders share the position that the full implementation of the relevant United Nations Security Council resolutions is necessary for the denuclearization of the Korean Peninsula, and then Prime Minister Thongloun expressed support for the early resolution of the abductions issue.