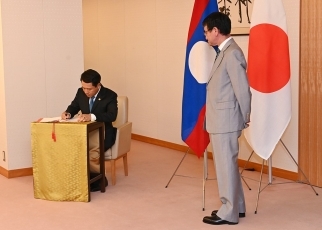 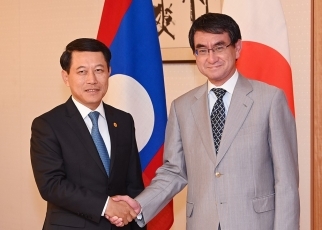 On May 31, commencing at 3:30 p.m. for approximately 35 minutes, Mr. Taro Kono, Minister for Foreign Affairs, held a foreign ministers’ meeting with H.E. Mr. Saleumxay Kommasith, Minister of Foreign Affairs of the Lao People’s Democratic Republic, during his visit to Japan. The overview of the meeting is as follows.

1. Minister Kono welcomed Minister Saleumxay on having this meeting for the first time in a year, and stated his intention to further strengthen the strategic partnership between Japan and Laos through the VIP visits between two countries and regional development in the Lao PDR. Minister Kono expressed that Japan intends to promote to maintain and strengthen “quality infrastructure development” and the “Free and Open Indo-Pacific” and further materialize“Tokyo Strategy 2018”. Furthermore, Minister Kono while noting that this year is the "Mekong-Japan Exchange Year 2019" stated that he hopes to further strengthen cooperation in the framework of Japan-Mekong and ACMECS (Ayeyawady - Chao Phraya - Mekong Economic Cooperation Strategy).

2. In addition, Minister Kono conveyed that, estimating an increase in business persons who will visit Japan from the Lao PDR, the Government of Japan has decided to extend the validity of multiple entry visas for business purpose for the Lao PDR, and stated that he looked forward to further advancing the bilateral economic relationship through the improvement of the investment environment by the Lao government.

3. In response, Minister Saleumxay stated that the assistance from Japan regarding fiscal stabilization, human resource development and infrastructure development are being steadily implemented, appreciated the decision to relax issuance requirements for visas and maintained that he would like to enhance cooperation between Japan and Laos for the achievement of SDGs.
Minister Saleumxay also added that he wanted to continue to work together in celebrating the 65th anniversary of Japan-Laos diplomatic relations in next year.

4. The two ministers exchanged views on the situation in North Korea. Both ministers also concurred to work closely together towards the ASEAN-related Foreign Ministers’ Meetings this summer.