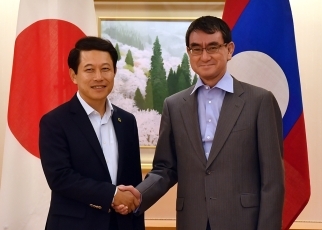 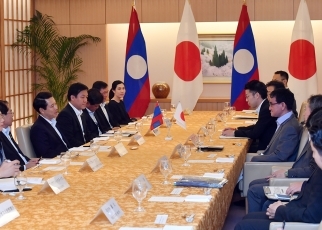 On June 11, commencing at 12 noon for approximately 60 minutes, Mr. Taro Kono, Minister for Foreign Affairs, held a foreign ministers’ meeting (working lunch) with H.E. Mr. Saleumxay Kommasith, Minister of Foreign Affairs of the Lao People’s Democratic Republic, during his visit to Japan. The overview of the meeting is as follows.

1. Minister Kono welcomed Minister Saleumxay on his second visit to Japan in 2018, stated his intention to further strengthen the strategic partnership (PDF)

between Japan and Laos, and expressed his gratitude for the warm hospitality he received during his visit to Laos in April. Furthermore, Minister Kono said that he hopes to further strengthen coordination and cooperation in regional and international arenas under the “Free and Open Indo-Pacific Strategy

2. In response, Minister Saleumxay expressed his gratitude for the warm welcome for the visit to Japan of H.E. Dr. Thongloun Sisoulith, Prime Minister of the Lao People’s Democratic Republic, as well as for the Japan’s long-standing support to Laos, and said that he will further promote friendly relations between Japan and Laos in cooperation with Minister Kono.

3. The two ministers exchanged views on bilateral relations including the human resource development for Lao government officials, economic assistance related to the removal of unexploded ordnance (UXO), people-to-people exchanges, and tourism development as well as on situations in the South China Sea and North Korea. Both ministers also concurred to work closely together towards the holding of the ASEAN-related Foreign Ministers’ Meetings this summer.