August 22, 2020From August 21 to 22, Mr. Motegi Toshimitsu, Minister for Foreign Affairs of Japan made an official visit to the Kingdom of Cambodia. The overview of the visit is as follows. 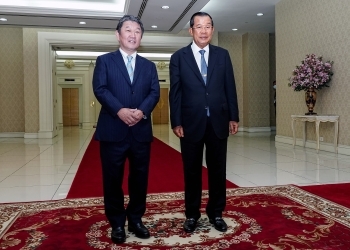 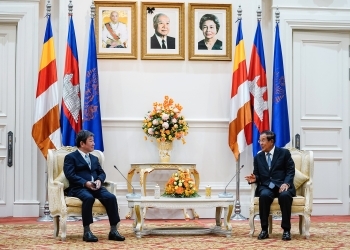 Minister Motegi expressed appreciation to Cambodia for accepting his visit as the first foreign dignitary amid the travel restrictions due to the novel coronavirus disease (COVID-19), noting that he was deeply impressed by the further transformation of Phnom Penh since his previous visit six years ago. Prime Minister Hun Sen stated that it is his great pleasure to welcome Minister Motegi amid the COVID-19 pandemic and the visit represents the strong relationship between the two countries.

Minister Motegi noted that it was important to gradually resume travel between the two countries, including by cross-border business travelers, in a way that prevents the further spread of COVID-19, and stated that Japan will commence the “Residence Track” as early as early September, which will enable long term residents to travel between the two countries while maintaining the requirement of 14 day quarantine at home or another designated area after their entry. Minister Motegi also stated that Japan would accept the entry to Japan by Japanese Government scholarship students from Cambodia at the earliest timing. In response, Prime Minister Hun Sen expressed his support and appreciation. In addition, Minister Motegi stated that the development of Sihanoukville Port and the National Road No. 5 were critical projects for increasing the linkability of the Southern Economic Corridor and promoting a “Free and Open Indo-Pacific,” and that Japan intends to continue to actively support the economic development of Cambodia. In response, Prime Minister Hun Sen reiterated his appreciation and expectation for Japan’s assistance.
Minister Motegi stated that Japan will continue to support the democratic development of Cambodia, including inviting young politics-oriented Cambodians to Japan. In response, Prime Minister Hun Sen explained the Government of Cambodia’s efforts for democratic development and expressed gratitude for Japan’s cooperation.

(3) Cooperation in the regional and international arena

The two sides discussed coordination for achieving synergies between the “Free and Open Indo-Pacific” and the “ASEAN Outlook on the Indo-Pacific,” cooperation on this autumn’s ASEAN related Summit Meetings and Mekong-Japan Summit Meeting, the issue of the South China Sea and the issue of North Korea, among other matters and shared the view to continue to coordinate closely. Prime Minister Hun Sen explained Cambodia’s efforts and expressed his support for Japan’s position on the abductions issue. 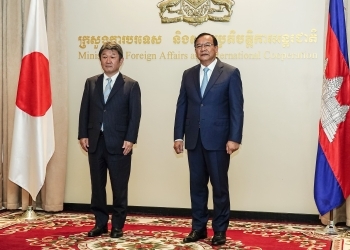 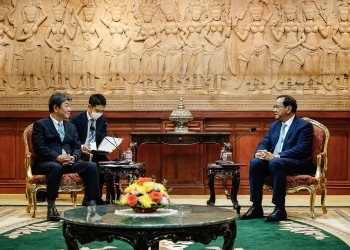 On August 22, commencing at 3 p.m. (local time; 5 p.m. JST) for approximately one hour, Minister Motegi held a meeting with H.E. Mr. Prak Sokhonn, Deputy Prime Minister and Minister of Foreign Affairs and International Cooperation of the Kingdom of Cambodia.

Minister Motegi stated that maintaining and strengthening the “Free and Open Indo-Pacific” (FOIP) has become more important than ever amid a dramatically changing international landscape due to the novel coronavirus disease (COVID-19), adding that Japan intends to further promote bilateral cooperation for maintaining and strengthening the FOIP. Minister Prak Sokhonn expressed his support and his hopes for further deepening the strategic partnership between the two countries.

Minister Motegi stated that coordination among the international community was critical for containing the spread of COVID-19 globally, and noted on the supports Japan has been providing to Cambodia, including renovations of Siem Reap Hospital, provision of medical equipment, and technical cooperation. Minister Prak Sokhonn expressed appreciation for Japan’s cooperation and expressed Cambodia’s intention to further work with Japan for combatting COVID-19.
Regarding resuming cross-border travel between the people of Japan and Cambodia, the two Ministers reaffirmed the commencementof the “Residence Track” as early as early September, which will enable long term residents to travel between the two countries while maintaining the requirement of 14 day quarantine at home or another designated area after their entry. In addition, the two Ministers concurred on accelerating coordination through diplomatic channels toward the early commencement of the “Business Track,” which will enable business travelers to conduct business activities in limted areas during the 14-days of quarantine.

(3) Cooperation in the regional and international arena

The two Ministers exchanged views regarding the issues of North Korea and the South China Sea, and confirmed that they will deepen cooperation between the two countries. In addition, the two Ministers shared the view on continuing to work together for the successful holding of the next Asia-Europe Meeting (ASEM) Summit Meeting in Phnom Penh.