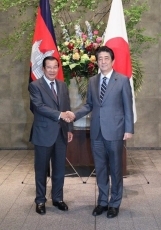 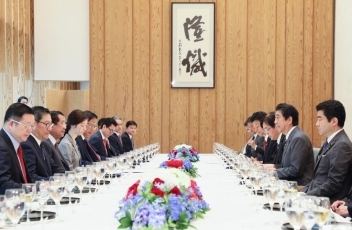 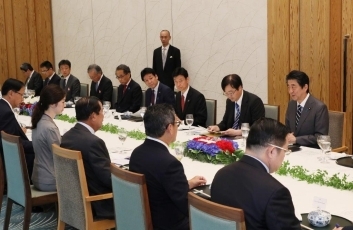 On May 31, commencing at 11:50 a.m. for approximately 50 minutes, Mr. Shinzo Abe, Prime Minister of Japan, held a working lunch at the Prime Minister’s Office with Samdech Akka Moha Sena Padei Techo Hun Sen, Prime Minister of the Kingdom of Cambodia, who was visiting Japan. The overview of the working lunch is as follows. The meeting was attended by Mr. Yasutoshi Nishimura, Deputy Chief Cabinet Secretary; Mr. Kotaro Nogami, Deputy Chief Cabinet Secretary; Mr. Kentaro Sonoura, Special Advisor to the Prime Minister; and others. Prior to the working lunch, the leaders attended the signing of the Exchange of Notes on the grant aid projects, “The Project for Human Resource Development Scholarship” and “The Construction Support of Container Freight Station in Sihanoukville Autonomous Port Special Economic Zone (The Economic and Social Development Programme).

(1) Prime Minister Abe stated that the Government of Japan will continue to support Cambodia’s democratic development, that two Cambodian women have been certified as the first to receive the “Specified Skilled Worker” status of residence, and that Japan intends to deepen people-to-people exchanges between the two countries. In addition, Prime Minister Abe stated that Japan will further promote initiatives for a “free and open Indo-Pacific” and hopes to achieve a prosperous and peaceful future in both countries.

(2) In response, Prime Minister Hun Sen once again congratulated the accession to the Throne by His Majesty the Emperor and stated that he looked forward to further advancing the bilateral relationship in the era of Reiwa. Prime Minister Hun Sen reiterated his support for “free and open Indo-Pacific” initiatives and expressed appreciation for Japan’s assistance, including for human resources development.

(1) Prime Minister Abe welcomed Prime Minister Hun Sen’s investment promotion policy, and asked that Cambodia further listen to the wishes of Japanese companies in Cambodia to expand investment and trade, including through the joint meeting between the public and private sectors. Touching upon the grant aid projects which were signed on this day, Prime Minister Abe stated that Japan intends to provide comprehensive cooperation for the development of the Sihanoukville Port, including establishing a master plan for port development, develop human resources through public-private efforts, and extend cooperation for urban development and strengthening the city functions of Phnom Penh.

(2) In response, Prime Minister Hun Sen stated that Cambodia places significance on Japanese investment, because of its high quality, and hopes to further increase investment from Japanese companies. Prime Minister Hun Sen expressed gratitude for the wide-ranging supports of the Government of Japan, and stated that Cambodia intends to proceed with the development of Sihanoukville Port with the cooperation of Japan.

3. Cooperation on democracy and governance

The two sides held an exchange of views on pressing issues in the regional and international arenas, including North Korea and the South China Sea, and shared the view that they will work together further. In particular, with regard to North Korea, the two leaders shared the position that the full implementation of the relevant United Nations Security Council resolutions is important for the denuclearization of North Korea, and Prime Minister Hun Sen once again expressed his support for the early resolution of the abductions issue.