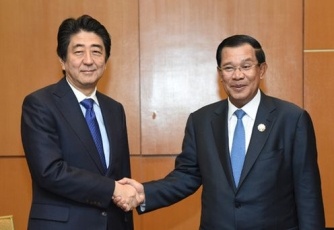 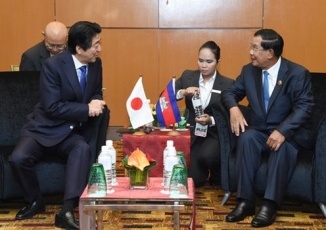 Photo: Cabinet Public Relations Office
On Saturday, November 21, commencing at 10:00 a.m. for approximately 20 minutes, Mr. Shinzo Abe, Prime Minister of Japan, held a meeting with Samdech Akka Moha Sena Padei Techo Hun Sen, Prime Minister of the Kingdom of Cambodia, at the venue for the ASEAN-related Summit Meeting. The overview of the meeting is as follows.

Prime Minister Abe stated that Japan has serious concerns regarding the stability of the South China Sea, Japan is focusing on a peaceful resolution to the situation based on the principle of the rule of law at sea, and Japan is also deeply concerned about unilateral changes to the status quo such as large-scale land reclamation, the building of outposts, and its use for military purposes.

In response, Prime Minister Hun Sen stated he believes that between China and ASEAN, in addition to the frameworks of the Declaration on the Conduct of Parties in the South China Sea (DOC) and the Code of Conduct (COC), consultations among the parties concerned are important.

Prime Minister Abe stated that he is concerned about the fact that the political situation in Cambodia has recently been becoming increasingly tense, and he hopes that as the next election approaches, the ruling and opposing parties will devote themselves to nonviolence, de-escalate a political tension, and maintain a "culture of dialogue."

Prime Minister Hun Sen responded by stating that in his position as Prime Minister, he wishes to keep the domestic situation from worsening, his government arrested persons engaged in violence, and dialogues between the ruling and opposing parties are continuing.

Prime Minister Abe stated that as for human resource development, regarding which Prime Minister Hun Sen had made a request, he intends to dispatch a mission and consider ways of Japan's support in this area.