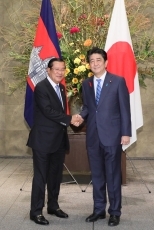 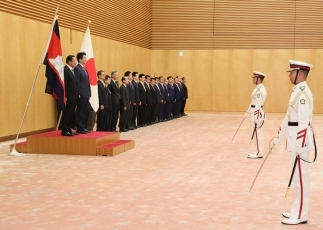 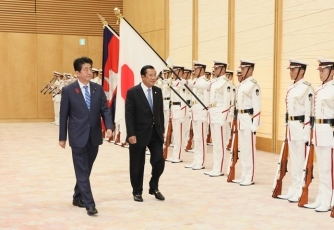 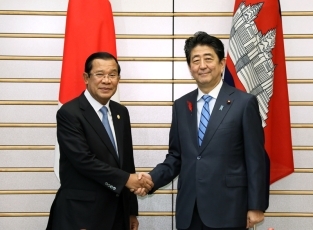 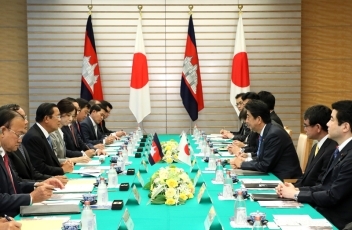 (1)At the beginning, Prime Minister Abe noted that this year is the 65th anniversary of the establishment of diplomatic relations between Japan and Cambodia, and explained that he is glad to be able to welcome Prime Minister Hun Sen to Japan this year, following the previous visit last year. Prime Minister Abe stated that Japan has worked closely with Cambodia to support its development thus far, and expressed his intention to hold a meaningful exchange of views at today's meeting in order to further expand the bilateral relationship and develop the Mekong region as a whole.

(2) In response, Prime Minister Hun Sen appreciated Japan-Mekong cooperation as an initiative that yields benefits such as rectifying the disparities between the advanced countries and less developed countries in the Association of Southeast Asian Nations (ASEAN), and stated that the formulation of new strategies is something that is aligned to the Mekong region's current demands. Prime Minister Hun Sen also reiterated his support for Japan's Free and Open Indo-Pacific Strategy.

(1) Prime Minister Abe explained that Japan has been walking alongside Cambodia on the path of democratic development and from here on also, Japan wants Cambodia to prosper by pursuing democratization and implementing national governance. To that end, Prime Minister Abe conveyed Japan's intention to enhance its governance support, and to invite young politicians from Cambodia's various political parties as well as electoral officials and have them use Japan's democratic process as a reference. Prime Minister Abe also expressed Japan's intention to support greater transparency and impartiality in Cambodia's judicial process.

(2) In response, Prime Minister Hun Sen expressed gratitude for Japan's cooperation, including its assistance for electoral reform, along with expressing his intention to move forward with developing a democratic nation.

The two sides held a frank and meaningful exchange of views on pressing issues in the regional and international arenas, beginning with North Korea and the South China Sea, and shared the view that they will work together further. In particular, with regard to the North Korea situation, Prime Minister Hun Sen explained that Cambodia shares Japan's position that the full implementation of the relevant United Nations Security Council resolutions is necessary for the denuclearization of the Korean Peninsula, along with once again expressing support for the early resolution of the abductions issue.