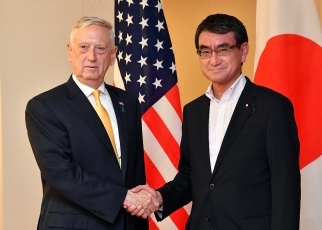 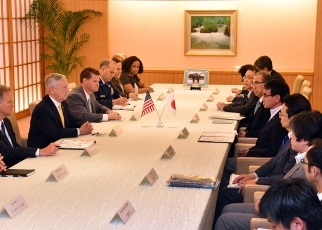 On June 29, commencing at 0:35 p.m. for approximately 40 minutes, Mr. Taro Kono, Minister for Foreign Affairs, held a meeting with the Honorable James Mattis, Secretary of Defense of the United States of America, who is visiting Japan. The overview of the meeting is as follows.

1. At the beginning, Minister Kono welcomed Secretary Mattis’s visit to Japan for the first time since February last year and expressed his gratitude to Secretary Mattis’s hospitality during Minister Kono’s visit to Washington DC in March, and then explained that he intends to work closely with the U.S. towards further enhancing operational and deterrent capability of the Japan-U.S. Alliance. In response, Secretary Mattis explained that the Japan-U.S. Alliance is a priority and he intends to fulfill his duty as the defense authority to support the efforts undertaken by the foreign authority.

2. The two sides exchanged views on North Korea and shared a view that the reconfirmation of Chairman Kim Jong Un’s intention for the complete denuclearization of the Korean Peninsula at the U.S. - North Korea summit meeting was a step towards the comprehensive resolution of outstanding issues of concern regarding North Korea and that Japan and the U.S. will be always together in the process going forward. The two sides also confirmed the following:

(1) Whether to continue the pause in the U.S.-ROK large scale combined military exercises is contingent upon North Korea’s action towards realizing complete, verifiable and irreversible dismantlement (CVID) of all of its WMD and ballistic missiles of all ranges.

(2) The Japan-U.S. Alliance and the U.S.-ROK Alliance as well as the deterrence based on them play essential roles in security in the North-East Asia, and neither withdrawal nor reduction of U.S. Forces in the ROK has been considered.

(3) The U.S. will not take a simultaneous and step-by-step approach, and measures pursuant to the UN Security Council Resolutions will remain in place until CVID is realized and countering ship-to-ship transfer will remain important.
Furthermore, Minister Kono stated that he intends to cooperate with the U.S. Department of Defense to resolve the abductions issue immediately, and, in response, Secretary Mattis explained that the U.S. Department of Defense has been undertaking efforts on Korean War POW and MIA, that these are human rights issues, and that he intends to cooperate with Japan to the maximum extent including through sharing information.

4. The two sides shared the intention to enhance coordination with any country that shares the vision and to advance cooperation especially in the fields of maritime security and sustainable development, with a view to realize the free and open Indo-Pacific

based on the rule of law.

5. The two sides shared concerns over situations in the East and South China Seas and confirmed that they will closely coordinate with each other.

6. The two sides also discussed regional affairs including the situation in the Middle East.

7. The two sides reconfirmed that Japan and the U.S. will continue to conduct the Japan-U.S. joint exercises with a view to maintain operational and deterrent capability and that they are committed to making steady progress in the realignment of U.S. Forces in Japan to facilitate mitigating impact on local communities including Okinawa.