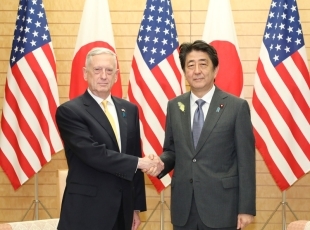 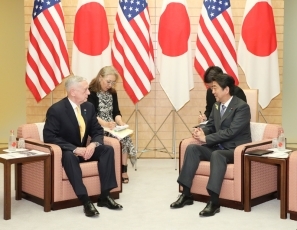 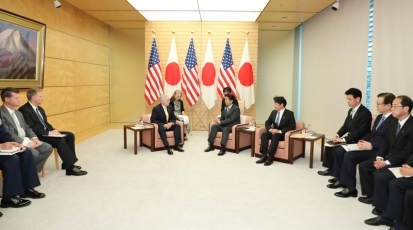 On June 29, commencing at 11:10 a.m. for approximately 50 minutes, Prime Minister Shinzo Abe received a courtesy call from The Honorable James Mattis, Secretary of Defense of the United States of America on his visit to Japan. The overview of the meeting is as follows.

2. The two sides exchanged views on North Korea and shared a view that the reconfirmation of Chairman Kim Jong Un’s intention for the complete denuclearization of the Korean Peninsula at the U.S. - North Korea summit meeting was a step towards the comprehensive resolution of outstanding issues of concern regarding North Korea, and Secretary Mattis stated that the U.S. will be always together with Japan in the process going forward. The two sides also shared a view that they will urge North Korea to take concrete actions towards realizing complete, verifiable and irreversible dismantlement (CVID) of all of its WMD and ballistic missiles of all ranges in accordance with the UN Security Council Resolutions. The two sides also shared recognition that the deterrence based on the Japan-U.S. Alliance and the U.S.-ROK Alliance plays essential roles in security in the region and shared a view that they will tirelessly strengthen operational and deterrent capability of the Japan-U.S. Alliance including missile defense while maintaining momentum of dialogues.
Furthermore, the two sides shared a view that they will further cooperate with each other to resolve the abductions issue immediately including through sharing information with the U.S. Department of Defense, which has been undertaking efforts on Korean War POW and MIA.

4. The two sides shared the intention to materialize cooperation, with a view to maintain and strengthen the free and open maritime order based on the rule of law in the Indo-Pacific.

5. The two sides shared concerns over situations in the East and South China Seas and confirmed that they will closely coordinate with each other.

6. Furthermore, Prime Minister Abe expressed appreciation for the efforts undertaken by U.S. Forces in Japan towards the defense of Japan and peace and stability in the region and called for cooperation to mitigate impact on local communities including Okinawa, including incident and accident prevention. In response, Secretary Mattis explained that the U.S. will undertake efforts for safe operation of U.S. Forces in Japan.