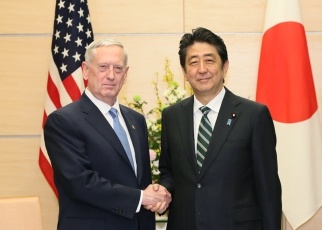 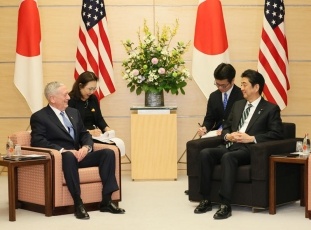 At the outset, Prime Minister Abe expressed his congratulations on the launch of the Trump administration and Mr. Mattis' assumption of the office of Defense Secretary, and stated that he appreciated Mr. Mattis' visit to Japan in his first visit as proof of the importance that he attached to the Japan-US alliance. Prime Minister Abe also said that with the Trump administration, he wished to make the unwavering Japan-US alliance an even more solid one.

Secretary Mattis said that the US would show that it would be with Japan, and in responding to the common challenges such as North Korea, he wanted to make clear the importance of Article 5 of the Japan-US Security Treaty.

Both sides exchanged views on regional challenges as well as undertakings to strengthen the alliance, and they agreed on having a more coordinated Japan-US response for peace and stability in the region.

Secretary Mattis stated that he reaffirmed the US commitment in the alliance, including its obligation to defend Japan as well as the provision of extended deterrence to its allies.

Prime Minister Abe laid out his view to expand the roles that Japan could take by strengthening its defense capability, amid the increasingly difficult security environment in the region. Both sides agreed on working together to further strengthen the Japan-US alliance.

Regarding the issues related to North Korea, both sides agreed on the recognition that nuclear and missile development by North Korea cannot be tolerated, and that it is important to improve deterrence and response capacities through security cooperation between Japan and the US, as well as among Japan, the US, and the Republic of Korea. Prime Minister Abe raised the abduction issue and secured understanding from Secretary Mattis on this matter. Both sides agreed to continue close cooperation to address North Korea issues, including the abduction issue.

Both sides shared concerns on the situation in the East China Sea and the South China Sea. Secretary Mattis stated that the Senkaku Islands are in the territories under the administration of Japan, and are within the scope that is covered by Article 5 of the Japan-US Security Treaty. Secretary Mattis also made clear that the US opposes any unilateral action that seeks to undermine Japan's administration of the Senkaku Islands.

Prime Minister Abe stated that he would work on mitigating the impact on Okinawa, and both sides agreed on making cooperation to ensure the stable stationing of the US Forces in Japan. They also confirmed that the relocation of the Futenma Air Station to Henoko is the only solution. Prime Minister Abe emphasized the full commitment of his Cabinet to the early realization of the relocation to Henoko, and stressed that the administration would steadily advance the related undertakings.