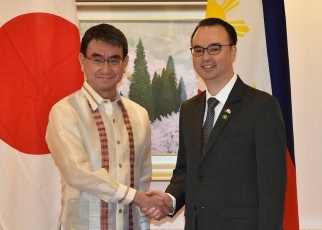 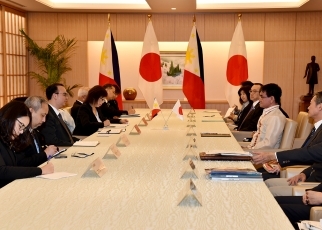 On October 31, commencing at 11:05 a.m. for approximately 40 minutes, Mr. Taro Kono, Minister for Foreign Affairs, held a foreign ministers’ meeting with H.E. Mr. Alan Peter S. Cayetano, Secretary of Foreign Affairs of the Republic of the Philippines, who is accompanying H.E. Mr. Rodrigo R. Duterte, President of the Republic of the Philippines, on his trip to Japan. The overview of the meeting is as follows.

Minister Kono welcomed the visit to Japan by President Duterte and Secretary Cayetano, explained that he is pleased to meet Secretary Cayetano again following their meeting in August this year, and stated that he expects to make this visit as an opportunity for further strengthening the “strategic partnership” between the two countries. Furthermore, Minister Kono welcomed that a joint statement on cooperation over the coming five years was issued between the two countries’ leaders, and stated that he will advance cooperation further. In response, Secretary Cayetano expressed his sincere gratitude for Japan’s support, stated that it is wonderful that Japan does not simply provide material and financial support but extends cooperation from the planning stage, and explained that he intends to work together with Minister Kono to achieve cooperation that befits what President Duterte refers to as the “golden age” of the “strategic partnership” between the two countries.

(2) The two ministers exchanged views on regional affairs, including North Korea and the South China Sea, and Minister Kono stated that it is important to intensify pressure on North Korea. Secretary Cayetano expressed strong support for Japan’s position on North Korea. In addition, Minister Kono requested understanding and cooperation to promptly resolve the abductions issue.

(3) Minister Kono expressed gratitude for the consistent support from the Philippines for Japan in the international arena, and the two ministers confirmed that they will work together to deal with various challenges.