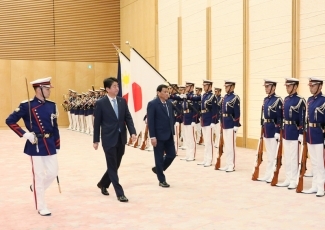 2 Prime Minister Abe also expressed his desire to engage in a frank exchange of views towards further strengthening the "Strategic Partnership" between the two countries. Additionally, Prime Minister Abe referred to Japan's announcement in January of contributions amounting to 1 trillion yen over the next five years, and expressed his intention to announce a joint document concerning cooperation over the next five years to substantiate these contributions, to swiftly and steadily implement the cooperation, and to demonstrate the strong "Strategic Partnership" between the two countries to the world.

3 The two leaders exchanged views on the Metro Manila railway development, strengthening connectivity between the regions, support for local urban development including that in Davao, strengthening resilience against natural disasters including measures to counter flooding in the industrial area in Cavite Province, resolving electricity issues, achieving the entry of Japanese companies in the area of LNG terminals, bilateral currency swaps, and "proposals for the industrial development vision." In addition, the two leaders agreed that the liberation of the City of Marawi was a great achievement by President Duterte, which sent a clear message that Southeast Asia will not be allowed to become a base for the Islamic State and is extremely important to the overall security of Asia, and discussed the provision of maximum support for the recovery and reconstruction of Marawi and its surroundings, and the strengthening of support for the development of Mindanao. They also discussed the mid- and long-term action plan for the next five years concerning countermeasures against illegal drugs, and, with regard to measures on terrorism, public security, and maritime safety, Prime Minister Abe noted that the  ceremony to hand over 40 patrol cars to the Philippine National Police (PNP) was held on October 25, while the commissioning ceremony for three patrol vessels and handover ceremony for three high-speed vessels are scheduled in November. Prime Minister Abe also said that, in order to ensure the effective operation of the patrol vessels and other equipment, Japan will provide coastal surveillance radars to the Philippines and the support team for capacity building, which was established by the Japan Coast Guard in October, will implement its first training sessions and drills in November in Manila. Furthermore, Prime Minister Abe announced that Japan intends to promote further defense cooperation.

4 In response, President Duterte expressed his gratitude for the longstanding support from Japan over the years, welcomed the realization of the outcomes included in the joint statement on this occasion as the result of the significant progress made through the three meetings of the Japan-Philippines Joint Committee on Infrastructure Development and Economic Cooperation beginning in March, and noted that these are all important projects for the Philippines. President Duterte also stated that Japan has long been actively engaged in Mindanao as a friend of the Philippines, that the cooperative relationship between Japan and the Philippines has been refined over many years, passing the test of time, and that it is important to take projects from creation to execution, from "build, build, build" to "done, done, done," and expressed his desire to strengthen the "Strategic Partnership" with Japan, a true friend of the Philippines.

5 The two leaders also exchanged views on challenge common to both Japan and the Philippines such as North Korea, maritime security, and collaboration towards the upcoming ASEAN-related summit meetings.

6 The two leaders shared the recognition that North Korea's continued nuclear and missile development is a threat, and confirmed the importance of strictly implementing the relevant United Nations Security Council resolutions. They also reconfirmed that they will continue working together towards an early resolution of the abduction issue, which is one of the top priorities of the Abe administration.

7 With regard to the ASEAN-related summit meetings, Prime Minister Abe conveyed the Japanese Government's policy of providing every support for the success of the meetings, which President Duterte will chair. President Duterte expressed his gratitude and stated his intent to work together closely with Japan.