Exchange of Notes Concerning Yen Loan to the Philippines 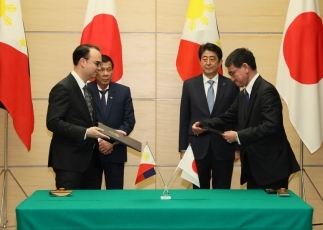 1. On October 30， Mr. Taro Kono, Minister for Foreign Affairs of Japan, and H.E. Mr. Alan Peter S. Cayetano, Secretary of Foreign Affairs of the Republic of the Philippines, exchanged notes concerning on the provision of a yen loan for the Cavite Industrial Area Flood Risk Management Project (loan provision of up to 15.928 billion yen) in the presence of Mr. Shinzo Abe, Prime Minister of Japan, and H.E. Mr. Rodrigo R. Duterte, President of the Republic of Philippines, in Tokyo following the Japan-Philippines Summit Meeting.

2. Overview of the target project
This project aims to reduce flood damage in the Cavite Province, which is mainly an industrial area, by implementing measures to counter flooding in this flood-vulnerable Province, and is thus expected to help overcome vulnerability and contribute to sustainable economic growth in the Philippines.

*Rate of interest of the consulting services will be 0.01% per annum.

[Reference] Japan-Philippines Relations (Basic Data)
The Philippines covers an area of approximately 299,400 square kilometers (roughly 80% the size of Japan). It has a population of 100.98 million (Philippines national census, 2015) and a gross national income (GNI) per capita of 3,580 U.S. dollars (World Bank, 2017)