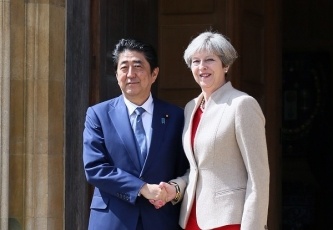 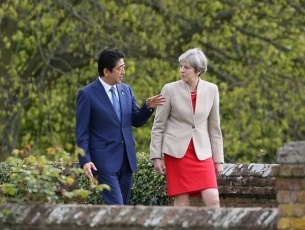 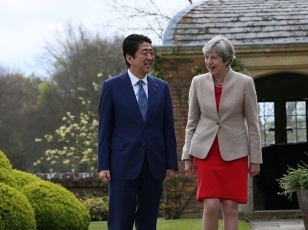 (1) The two leaders shared the view that they attach importance to one another as global strategic partners that share universal values, and in addition to the fields of security and defense as well as the economy, they agreed to collaborate closely in responding to common domestic issues including promoting women’s active role, and set an example for the world.

2. Cooperation towards the G7 Taormina Summit

(1) The two leaders shared the view that amid concerns about the rise of protectionism and inward-looking sentiment, the G7 should show the world that the G7’s value, unity and responsibility stand firm.

(2) Specifically, the two leaders reconfirmed that it would be necessary to solidify the global economy’s return to a growth track and deal with downside risks and discontent over disparity, and that they would use all policy tools to that end. The two leaders also shared the view that they would further promote the major agenda (PDF)

items of the G7 Ise-Shima Summit such as quality infrastructure, health and women’s active role and confirmed that these efforts would also be beneficial for dealing with common domestic challenges in Japan and the U.K.

(3) In the field of politics and diplomacy, they confirmed the importance that the G7 would continue to deepen its debate and unify its voice with regard to such matters as the situation in East Asia and maritime security, which the G7 had deepened discussions in recent years.

(1) The U.K.’s exit from the EU
Prime Minister Abe stated that Japan supports a strong Europe and a strong Europe brings peace and prosperity to the world, and expressed his expectation that Europe would remain strongly united even after the U.K. leaves the EU. Furthermore, Prime Minister Abe appreciated that in the U.K.’s negotiations to leave the EU, the U.K. was attaching importance to ensuring transparency and predictability and to establishing a transition period in the course of the exit. He also requested Prime Minister May to continue to give consideration for the maintenance of smooth corporate activity.
The two leaders shared the view that they would work closely together toward the maintenance and enhancement of the economic relationship and partnerships in the industrial field between Japan and the U.K. after its leaving from the EU.

(2) Japan-EU Economic Partnership Agreement (EPA)
The two leaders shared the view that amid outstanding protectionist moves worldwide, Japan and Europe must continue to fly high the flag of free trade together with the United States, and Japan and the U.K., which are self-avowed flag bearers of free trade, would exercise leadership together hand in hand. In this regard, the two leaders shared the view that they would collaborate closely to realize an agreement in principle on the Japan-EU EPA as early as possible.

(3) Removal of import restrictions
Prime Minister Abe explained that the recovery from the earthquake disaster was Japan’s biggest challenge, and requested cooperation toward removing import restrictions on food products produced in Fukushima Prefecture and elsewhere that have been scientifically verified as safe.

(2) The two leaders touched on Prime Minister Abe’s visit after the meeting to the National Cyber Security Centre, which Prime Minister May made efforts for setting up during her tenure as Home Secretary, and confirmed that Japan and the U.K. would promote sharing expertise on security responses toward the 2020 Tokyo Olympic Games.

(1) Prime Minister Abe stated that it was important to keep the Indo-Pacific as global commons that is free and open to all countries. To that end, the two leaders agreed to concretely promote security and defense cooperation such as upholding the order based on the rule of law including freedom of navigation, assistance for the enhancement of maritime law enforcement capabilities, as well as joint exercises.

(2) The two leaders highly appreciated that the French training task group “Jeanne d’Arc”, which would be carrying U.K. marines, would visit Japan on April 29, and that a four-nation joint exercise involving Japan, France, the U.K. and the United States would be held in the Asia-Pacific region including Guam, as demonstrating their strong commitment to freedom of navigation. 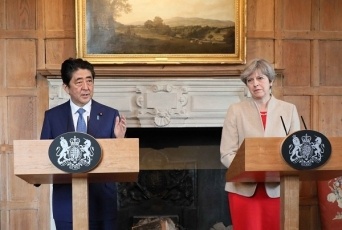 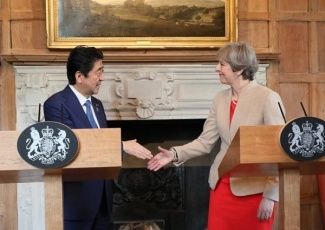 (1) The two leaders shared the view that North Korea represented a new level of threat, and Japan and the U.K. would continue their coordination, including in the discussions currently taking place at the United Nations Security Council (UNSC) in New York, against North Korea’s further provocative actions. Prime Minister Abe explained that he regarded resolving the abduction issue as a top priority, and Prime Minister May expressed her understanding and support for the efforts to resolve that issue.

(2) With regard to the situation in the East China Sea and South China Sea, the two leaders shared the view that they would continue to work closely together to maintain the international order based on the rule of law.

(3) With regard to the situation in Syria, the two leaders shared the view that the use of chemical weapons that occurred in Syria is absolutely unacceptable, and shared recognition as the situation was becoming complicated now, it was high time when close coordination between Japan and the U.K. was important.