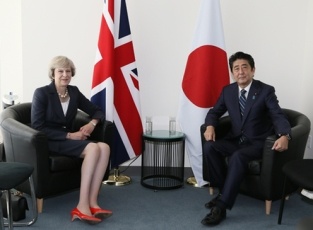 On September 20, from 9:30am (local time) for approximately 40 minutes, Prime Minister Shinzo Abe, who is visiting New York, the US to attend the UN General Assembly, held a summit meeting with the Rt.Hon. Theresa MAY MP, Prime Minister of the United Kingdom of Great Britain and Northern Ireland. Its overview is as follows.

Prime Minister Abe stated that he was glad to be able to see her again since G20 Summit, he attached importance to the UK as a global partner which shares fundamental values, which would not be changed even after the UK’s exit from the EU, and that he would like to further develop the bilateral relations in close cooperation with Prime Minister May. In response, Prime Minister May said that she was glad to be able to sit down and discuss today, and that she would like to closely cooperate to further strengthen Japan-UK relations while emphasizing that the UK also attaches importance to the bilateral relations.

Prime Minister Abe stated that Japanese companies are investing in the UK since they highly appreciate its excellent business environment, and that he would like to ask for due consideration to enable their businesses to continue. In reply, Prime Minister said that it was clear that the UK was committed to free trade, trade and investment relations with Japan were extremely important, and that she would like to deal with this issue so that Japanese companies can continue their businesses.

Prime Minister Abe mentioned that a series of missile launches and nuclear tests by North Korea constituted an unprecedented level of threat and different reaction was required. Prime Minister May responded by saying that she totally shared Japan’s views, the nuclear test by North Korea this time could never be tolerated, and that it was necessary for the international community to cooperate in its response.

Both leaders confirmed that they would closely cooperate to adopt a UN Security Council resolution which includes additional sanctions. Also, Prime Minister Abe called for cooperation from Prime Minister May so that all victims of the abductions can return to Japan at the earliest time.

Based on the fact that Japan and the UK are the closest security partners to each other in Asia and Europe, both Prime Ministers confirmed that they would further advance cooperation in the area of security and defense between the two countries. In addition, from this perspective, the two Prime Ministers welcomed the joint training between Japan and the UK on the occasion of the visit of the Royal Air Force Typhoon aircraft to Japan in October this year.

The two Prime Ministers also exchanged views on regional affairs such as the South China Sea, confirmed their close cooperation, and agreed with the importance of the rule of law.

Prime Minister May stated that she would like to cooperate for the success of the 2020 Tokyo Olympic and Paralympic Games.

Prime Minister Abe explained that he hoped for proactive engagement with the Asian region by the UK to maintain the international order based on the rule of law, and that Japan would like to promote collaboration between the two countries on a global scale. Prime Minister May responded by saying that the UK, as Japan’s global strategic partner, would like to continue to closely cooperate to develop the Japan-UK relations in not only the economic area but also various areas.