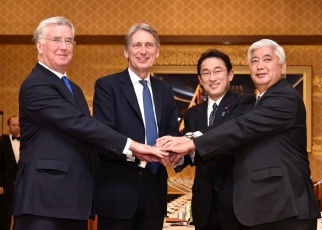 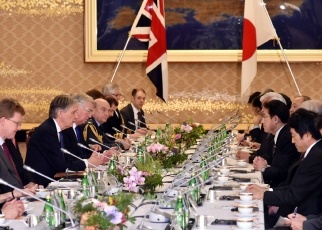 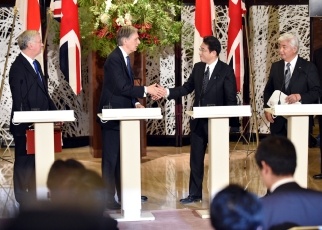 On January 8, Mr. Fumio Kishida, Minister for Foreign Affairs of Japan, and Mr. Gen Nakatani, Minister of Defense of Japan, held the 2nd Japan-UK Foreign and Defence Ministers’ Meeting (“2+2”) with the Rt Hon Philip Hammond MP, Secretary of State for Foreign and Commonwealth Affairs of the UK, and the Rt Hon Michael Fallon MP, Secretary of State for Defence of the UK, who are visiting Japan. The meeting commenced at 6:50 p.m. for approximately 60 minutes. Commencing at 8:25 p.m. for approximately 50 minutes, a working dinner was held, and a joint statement was issued. The overview of the meeting is as follows.

1. General issues
The two countries confirmed they would work together to strengthen concrete cooperation on security and defence between Japan and the UK based on Japan’s Legislation for Peace and Security and the UK’s National Security Strategy (NSS) and the Strategic Defence and Security Review (SDSR) 2015.

The Japanese side expressed expectation that under the new NSS and SDSR, the UK would play a more proactive and constructive role for the Asia-Pacific security environment, and contribute to the region’s peace and stability.

The two countries shared the view that they would continue to coordinate closely on promoting further Japan-UK cooperation towards the next “2+2,” which will be held in London next year.

2. North Korea
Both countries shared the view that the nuclear test recently conducted by North Korea was a grave threat to the peace and security of the international community, and it would be important for the international community to promptly make a firm response. They confirmed that they would work closely together toward the prompt adoption of a new United Nations Security Council (UNSC) resolution with strong contents. In addition, the two countries reconfirmed the importance of immediately resolving North Korea’s human rights problems and the abductions issue.

3. Regional situation
Both countries discussed the situation in the Asia-Pacific region. They shared concerns about the situation in the South China Sea and East China Sea in particular, and they confirmed the importance of the rule-based international system, sharing the view that all disputes should be resolved in accordance with international law. In addition, they expressed their opposition to unilateral attempts to change the status quo.

Additionally, the UK welcomed the holding of the Japan-China-Republic of Korea (ROK) Trilateral Summit last year, and the Japan-ROK agreement on the comfort women issue.

Furthermore, they also exchanged views on counterterrorism, the Middle East situation, and the Russia-Ukraine situation.

4. Security and defence cooperation
The two countries shared the view that negotiations on the Japan-UK Acquisition and Cross-Servicing Agreement (ACSA) would be concluded as soon as possible. They also concurred that they would promote joint exercises, and that they would discuss ways to facilitate such exercises. Additionally, both countries confirmed that they would cooperate on defence equipment and technology as well as capacity-building support (humanitarian assistance and disaster relief (HA/DR), maritime security, cybersecurity, among others.) for Southeast Asian countries.

5. Cooperation in the international community
The Japanese side emphasized the importance of the UNSC reform, and the UK side responded by reiterating its strong support for Japan’s permanent membership of the UNSC.