In January 1952, the President of the ROK, Syngman Rhee, issued a declaration concerning maritime sovereignty, with which he established the “Syngman Rhee Line.” Establishment of this line, encompassing the island of Takeshima and a large area of water with fisheries jurisdiction, was a unilateral act in contravention of international law.

In March 1953, the Japan-U.S. Joint Committee decided to release Takeshima from the designation of a bombing range for the U.S. Forces. This enabled Japanese to resume fishing around Takeshima, but it was confirmed that Koreans were also engaging in fishing around the island. In July of the same year, a Japanese patrol vessel of the Maritime Safety Agency (now the Japan Coast Guard) demanding that Koreans engaged in illegal fishing leave Takeshima was fired upon by Korean authorities who were protecting the Korean fishermen.

In June 1954, the ROK Ministry of Home Affairs announced that the ROK Coast Guard had dispatched a permanent battalion to Takeshima. In August of the same year, a vessel of the Maritime Safety Agency on patrol near Takeshima was fired on from the island, and with this incident it was confirmed that ROK security personnel had been stationed on Takeshima.

Since then, the ROK has kept security personnel stationed on Takeshima and constructed lodgings, a monitoring facility, a lighthouse, and port and docking facilities.

The establishment of the Syngman Rhee Line constitutes an illegal delineation of the high seas , and the occupation of Takeshima by the ROK constitutes an illegal occupation undertaken without basis in international law. No measures taken by the ROK during its illegal occupation concerning Takeshima have any legal justification. Such acts can never be accepted in light of Japan’s position regarding its sovereignty over Takeshima. Japan has strongly protested against each and every measure taken by the ROK and has demanded the withdrawal of said measures each time. 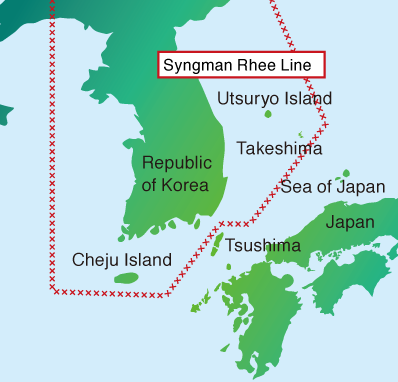