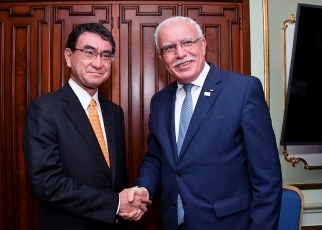 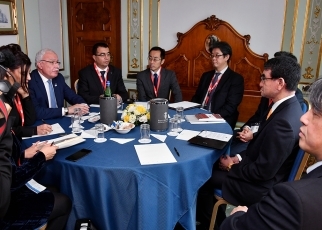 On Saturday, November 24, commencing at 10:30 a.m. (local time; 6:30 p.m. on the same day, Japan time) for approximately 30 minutes, Mr. Taro Kono, Minister for Foreign Affairs, during his visit to Rome, the Italian Republic, held a meeting with H.E. Dr. Riad Malki, Minister of Foreign Affairs and Expatriate of Palestine. The overview of the meeting is as follows.

1. At the beginning, Minister Kono expressed his thanks for the contributions that Minister Malki made at the Third Conference on Cooperation among East Asian Countries for Palestinian Development (CEAPAD), which was held recently in Thailand, and explained that Japan will continue to support Palestine through the Jericho Agro-Industrial Park (JAIP) and CEAPAD.

2. In addition, Minister Kono proposed holding a meeting relating to CEAPAD in Palestine, and Minister Malki welcomed the idea.

3. Minister Malki expressed thanks for Japan’s support for Palestine (PDF)

through unique initiatives such as the “Corridor for Peace and Prosperity” initiative and CEAPAD, and expressed expectation towards Japan’s role in relation to the Middle East Peace Process.

4. Furthermore, the two ministers also exchanged views on the Middle East Peace Process, and confirmed that they will continue to coordinate closely in order to move this issue forward.